PorscheMama » Uncategorized » View From the Back Seat: Is the Audi A3 Sedan a Family Car?

Is Ego Getting in the Way of Your Photos (and Selfies)? Me Too.
Goodbye, Tooth Fairy: The Bittersweet Joy of Watching Children Grow

View From the Back Seat: Is the Audi A3 Sedan a Family Car?

I love small cars — that’s no secret. Our current family car, an Audi A4 Avant, is not large by any means, but it is still larger than the previous generation of Avants. As our daughters get older, I wonder whether our family could go smaller in the car department. Personally, I’d like to get into an A3, my not-so-secret Audi crush. A few months ago, as if Audi were reading my mind, an A3 Sedan appeared on the market, so the girls and I decided to go check it out. 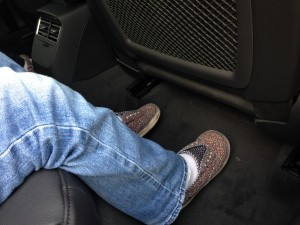 Plenty of legroom, unless you need to tackle your sibling.

A black-on-black A3 2.0T sedan was procured for us and as soon as we climbed into it, the girls felt right at home (read: they started fighting in the back seat). While I took the time to examine the interior and trimmings, they argued over who should be taking notes on which device. This confirmed my suspicion that while the back of the A3 does offer plenty of space for two passengers, it is best if said passengers don’t like to fight back there*, because your seat is bound to get kicked. “How’s the back seat girls?,” I asked, and they replied, “fine. A little smaller than our car — gimme the pencil!! Moooom!!”

Our well-appointed test car had the Premium Plus package and Navigation Plus Package and was priced at $39.900 (base price is $32,900). Audi interiors are known for being well made, and the 2015 A3 is no exception. “The interior is very nice, Mom,” said V, and her sister and I agreed. 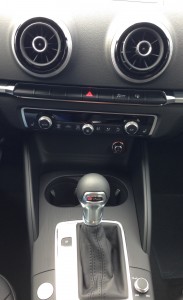 The Premium Plus package includes 18-in wheels, heated front seats and mirrors, interior aluminum details, and Audi Advanced Key (basically a push-to-start). I am still not a big fan of the Advanced Key, not because it isn’t cool, but because I am certain I would lose it. Not just that — I never know where to put said key once I am in the car, so it ends up in the cupholder. I am surprised those German engineers haven’t designed a cute little spot in which to park the key while you’re in the car. I suppose part of the allure is that you can leave it in your pocket, but then I’ll just leave it in my coat. The girls were willing to hold it, but that would have most certainly caused it to disappear. Mom problems.

The wheels are pretty and the interior details are lovely, but it is the heated seats I adore. We live in the Midwest: home of the Polar Vortex, true Land of Quattro. And just in time for our test drive, flurries had begun to fall. I never knew just how much I would love a heated seat until I had to get in a -10 degree car last January.Turns out the girls agree. When I asked them to suggest improvements to the car, V said, “I would recommend putting some seat warmers in the back too.” Smart kid.

The 2015 A3’s interior kept most of the details of 2014 Audi models, with a few notable exceptions. The gear knob is circular and more sporty and ergonomic (though it made me long for a manual transmission). The air vents are now circular, somewhat reminiscent of the original TT vents. The center console between the seats is still there, with the large selector wheel and 4 menu buttons. Everything in this console is still fairly predictable, though there were so many options I’d have to spend some time working my way through them all to commit them to memory. I gladly would have (the heated seat was set to 6, aahhhh), but my passengers were getting increasingly restless and it was time to get on the road. 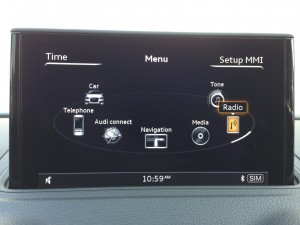 The pop-up screen I didn’t like in the 2014 Audi models is still in the 2015 models. I am not a fan of visual distractions inside cars — there are already too many, including electronics and the kids. While I understand the goal of having the screen pop up from the dash at the driver’s eye level is a feature — it’s safer for drivers to look at the screen roadside level — I don’t appreciate that it pops up by default, vs at the driver’s request. Each time I fired up the car, up came the screen, and down I set it manually. I don’t want a pop-up screen — I want a nice open windshield so I can see the road. These navigation screens have become the modern graduation tassels / kid shoes / dreamcatchers. They are everywhere — the 2014 Impala we rented in California last summer had one of those incredibly annoying, up and down touchscreens. It was already moody 5,000 miles into its life, and ended up crushing my husband’s iPhone cable in the course of our vacation week. The girls disagreed with me on my dislike of the screen. “The picture of the car is really cute, Mom. You probably don’t like it because you don’t like screen time or video games.” They could have a point there…

As soon as we set off and came to our first stop, V said, “it stops pretty hard even when you’re not going too fast, Mom.” And, indeed, the brake pedal in the A3 is pretty boosted — but not too different from the last two model years. Once I figured out the brake requires very little pressure, our stops were less harsh. 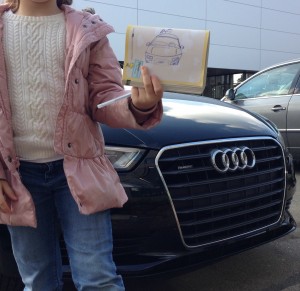 My co-reviewer offers a sketch of the A3.

The first thing we noticed was the acceleration, which seemed to have a bit more oomph than our Avant, even in standard operating mode (vs. sport). This is partly due to the car’s size and weight, of course, but also due to the reliable powerhouse that is the Audi 2.0 T engine, which boasts a combined fuel economy of 27 mpg (24 city / 33 highway) and is constantly being improved by Audi.

The S-Tronic transmission, too, has improved. Overall, the car upshifts smoothly (barely noticeble unless you’re paying close attention) and downshifts more nimbly than its previous iteration. This is a fun and welcome change, because those of us who purchase sedans like the A3 still have youthful souls and like to feel the oomph under our feet, even if our drycleaned  suits are swinging around in the back.

Our first spirited corner brought the customary “Mooooom”  and laughter from the girls. “This car feels like it goes around corners better than ours,” said J. And, indeed, the A3’s turn-in feels a bit sharper than our Avant’s. Generally speaking, the steering has a nice, sharp feel — a great blend between sporty and comfortable.

This A3 came with the Bang & Olufsen sound system upgrade ($850 extra), which I found to be solid, but not stunning. Audi may have spoiled the girls and I because their cars generally have great stereo systems and decent sound (are you listening, Porsche?). The sound system was not hard to operate, but it did require some familiarization with the control panels. Thankfully, the controls are intuitive. Steve Perry came on the radio and J and I started to sing, while V opted out and mentioned something about his girly haircut. 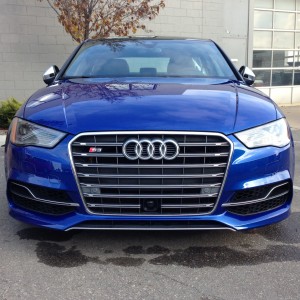 Overall, the A3’s ride is unmistakably Audi: firm, sporty, quiet, comfortable. “this car is SMOOTH, Mom!” said V.  J summed it up best. “If I close my eyes, Mom, it feels like we are in our car.” She was spot-on: the A3 definitely has the Audi feel, and that is a good thing. I believe Audi is still the best choice for the driver who needs functional comfort but wants to keep a little sportscar in his or her life–and our family definitely does.

So is the A3 a family car? It most certainly could be. I asked the girls whether they would trade our Avant for the A3, and they said, “nooo!”  Added J, “I think it would be too squished for more than 4 people, and Lucy (dog) won’t fit.” I’d have to agree with her. If you have a family that plays hockey or involves more than 2 children, the A3 is probably too small for you–go for the Q5. And if your child picks up the ‘cello, it’s time for a Q7. But when they go to college, here comes Mama, S3.

* By fighting, I mean physical fights. There is plenty of room for verbal arguments in the back seat of the A3.

Thanks to the Eric Gedeon of Germain Audi of Ann Arbor for facilitating this test drive.

Video: Driving the All-Season PSAS3 Tire on (Lots of) Snow

Build Your Mind-Body Connection, See Results at the Race Track (and Elsewhere)