Build Your Mind-Body Connection, See Results at the Race Track (and Elsewhere)
Is Ego Getting in the Way of Your Photos (and Selfies)? Me Too. 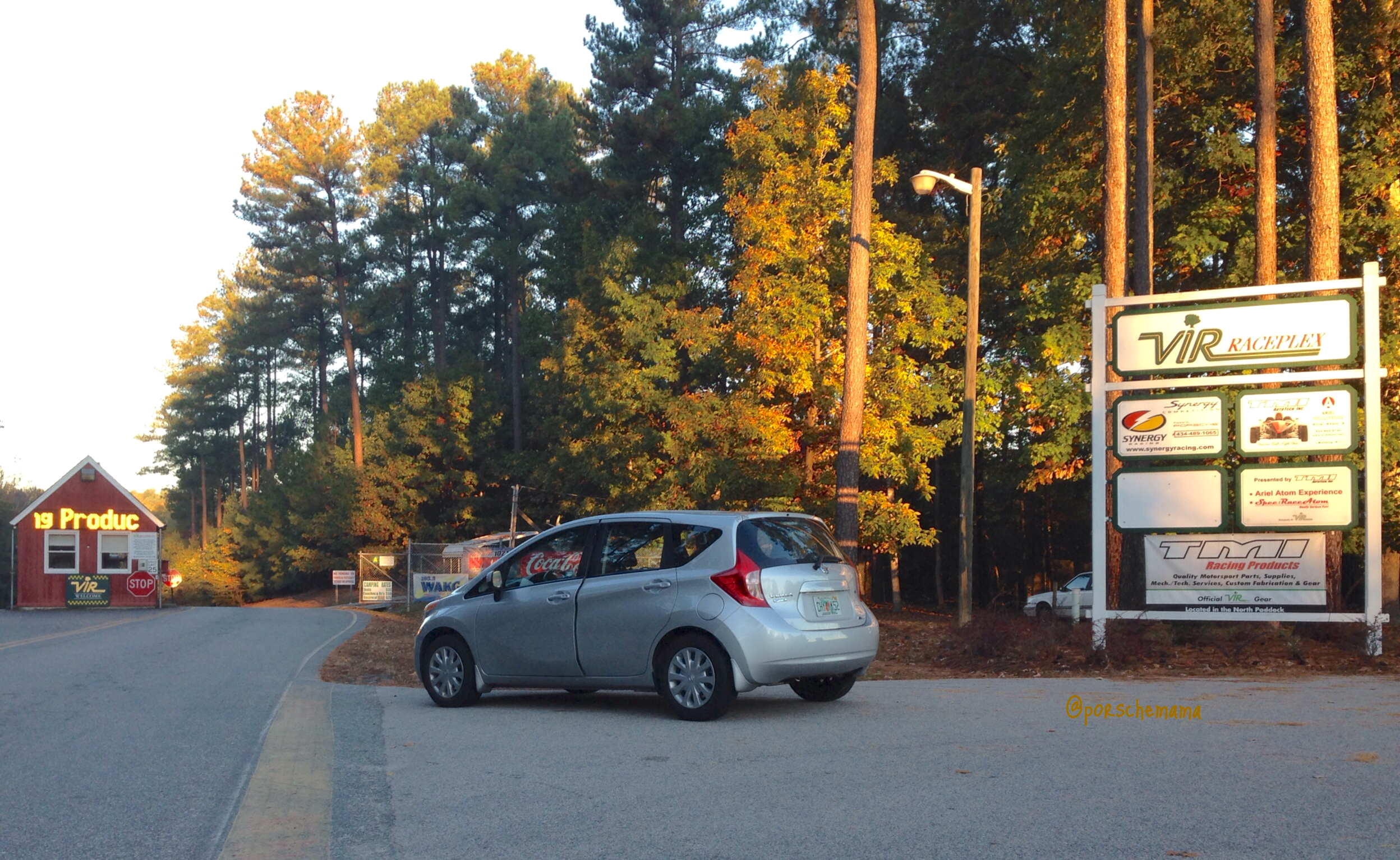 The Nissan Versace after our spirited ride to V.I.R.

Last weekend, I was in Virginia to support my husband in the 13-hour Charge of the Headlight Brigade race at Virginia International Raceway (V.I.R.). I believe the role of Race Track Support may as well have been written into my marriage vows –this is my sixth year of being a spectator at my husband’s various racing endeavors. Thankfully, I really enjoy spending time in the deafening, weather-exposed, fume-laden, middle-of-nowhere oases that are race tracks, not just because of the automotive action, but also because the people who frequent such events tend to be pretty nice. Now that I am practically a “veteran,” I thought I’d offer some tips for those of you who may be considering spending time at a racetrack supporting you racer or for your own DE event.

Upon arrival at V.I.R., I checked in with my husband, who reported his nutritional intake over the 10-hour practice day: Gatorade, cold pizza and a snickers bar, topped off by the Speedy Gonzalez Especial at the local Mexican restaurant. I was not surprised. Race tracks are located in the middle of nowhere, which means food choices are often very, very limited at and around the track. The food sold at the race track itself is often some version of portable meat and potatoes (burger, chicken sandwich, fries). Then there is the matter of the magic elixir known as coffee…forget it. Getting a good cup at a race track will be a larger challenge than keeping up with a Cup Car on the V.I.R. back straight.

Which brings me to my first race track survival tip:

Bring the food you like or can eat, and if possible, bring coffee, milk and/or creamer.

Sometimes (particularly if you fly) it is impossible to bring fresh food with you, and it is likely that you won’t find a restaurant beyond a Wendy’s to serve up your dinner. If that is the case, 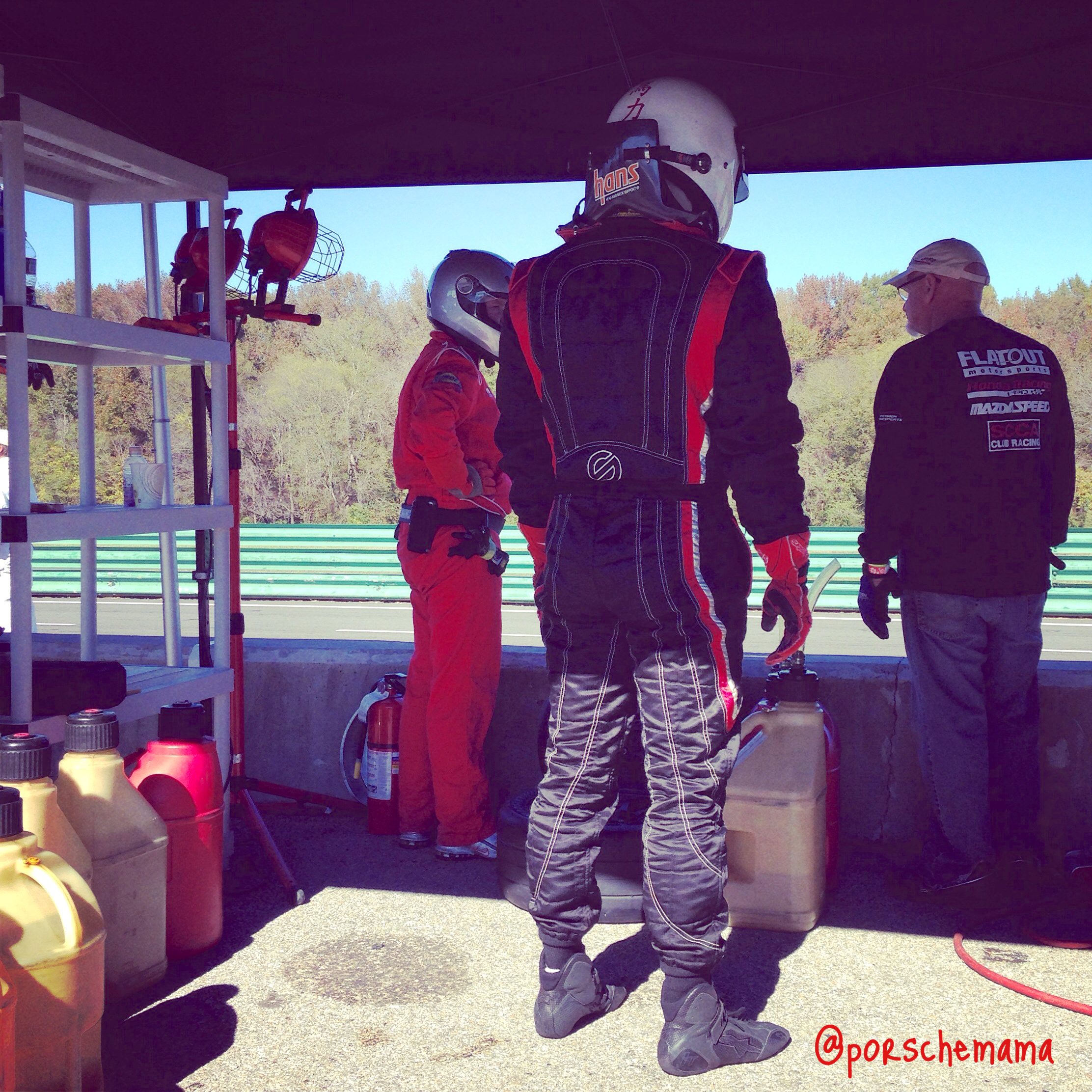 My husband waits for his first stint at the 13-Hour.

Find the nearest Walmart, which has a surprising array of food choices (if you are willing to survive its cavernous depths).

First thing after my arrival, I hopped in the Versace (my rental Nissan which my iPhone autocorrect had re-named in a far more glamorous fashion) and drove to the nearest Walmart. After approximately 30 minutes of aimless wondering, I found a variety of fresh and dried foods, along with plenty of Gatorade to keep the drivers hydrated. Now armed with plenty of food and snacks, I headed to the race track to prepare for the race.

I’ll admit there is an upside to racetracks being in the middle of nowhere: the vistas. The roads between my hotel and V.I.R. are beautiful and green, peppered with horses and cows enjoying the sunrise and lifting fog. The roads are wavy and smooth, unlike our pothole-ridden MI roads. I wished I’d had a little more oomph for these glorious roads, but at 60 mph, every one of the Versace’s 109 horses in the 1.6-liter, 4-cylinder engine was galloping as quickly as it could to get me to my destination. If ever I’ve rented a momentum car, the Versace was it. Once I figured out the vague steering and planned ahead a bit, she managed to hold onto the turns, its little wheels squealing with unexpected delight. 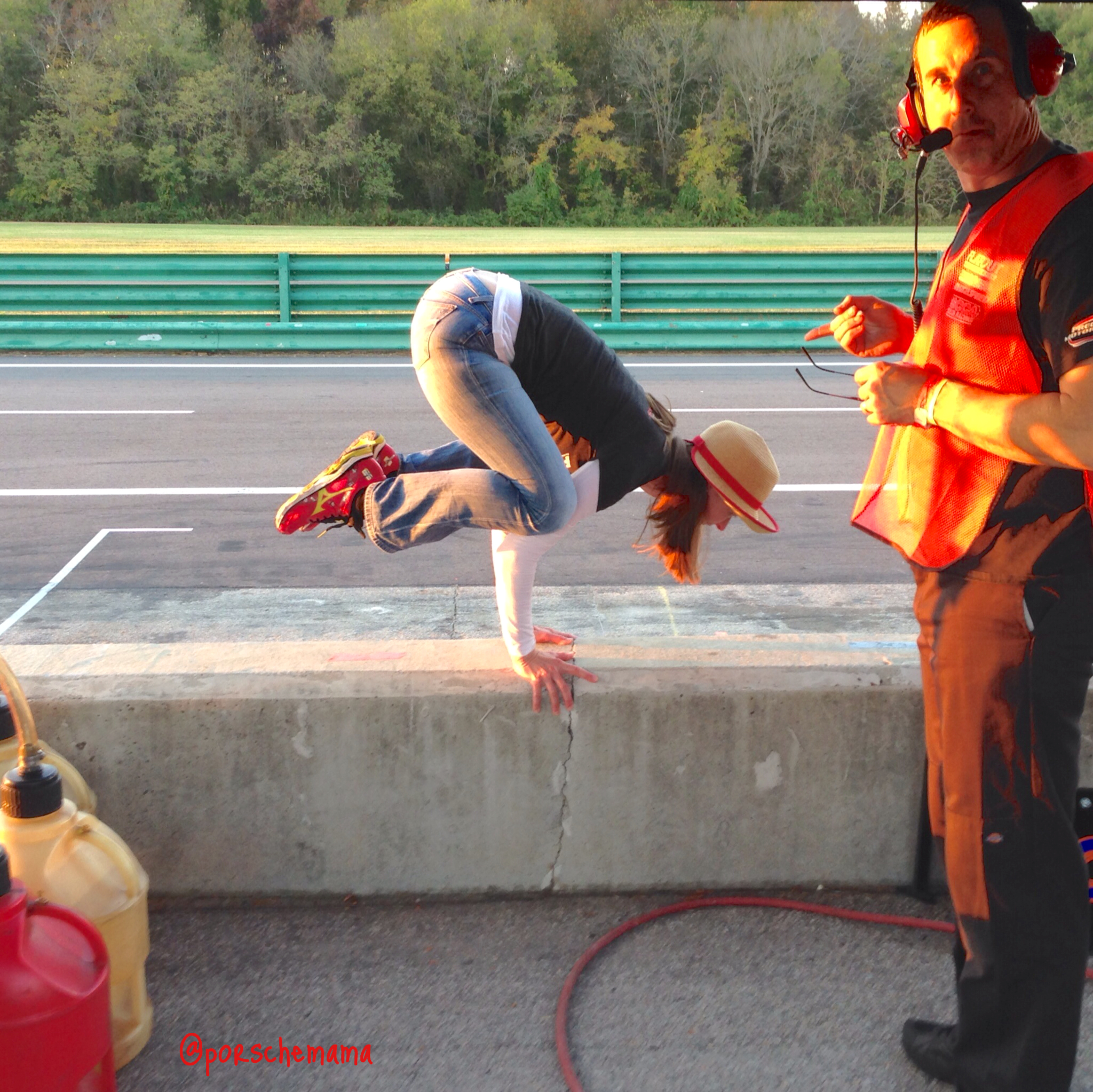 13 hours is a long time to sit still.

At V.I.R., the paddock was busy with last minute preparations for the 13-hour race. The buzz and intensity before a race starts is a great thing – while the crews run around, the drivers become calm and turn inward.

Before a race, enjoy observing the hustle of the teams as they work through the last-minute preparations for the race – this is a great time to get some great photos of the cars and drivers. Just be sure to stay out of the way! Race cars, transporters, golf karts and mechanics have the right of way at the track.

At 9:15 a.m., my husband’s co-driver started the race in the #91 Spec Miata. After the excitement of the green flag, both drivers and spetctators settled in for the long race ahead. The was for my husband and his co-driver to complete the 13-hour race between the two of them–an unbelievable 6.5 hours of time behind the wheel each. While most of us would consider being behind the wheel 6.5 hours insane, the prospect makes race car drivers giddy and wide-eyed, and such was the case with my husband and his co-driver, an intense former Spec Miata National Championship winner.

Want to make friends with a driver? Ask him or her to tell you why he or she drives and watch them light right up. 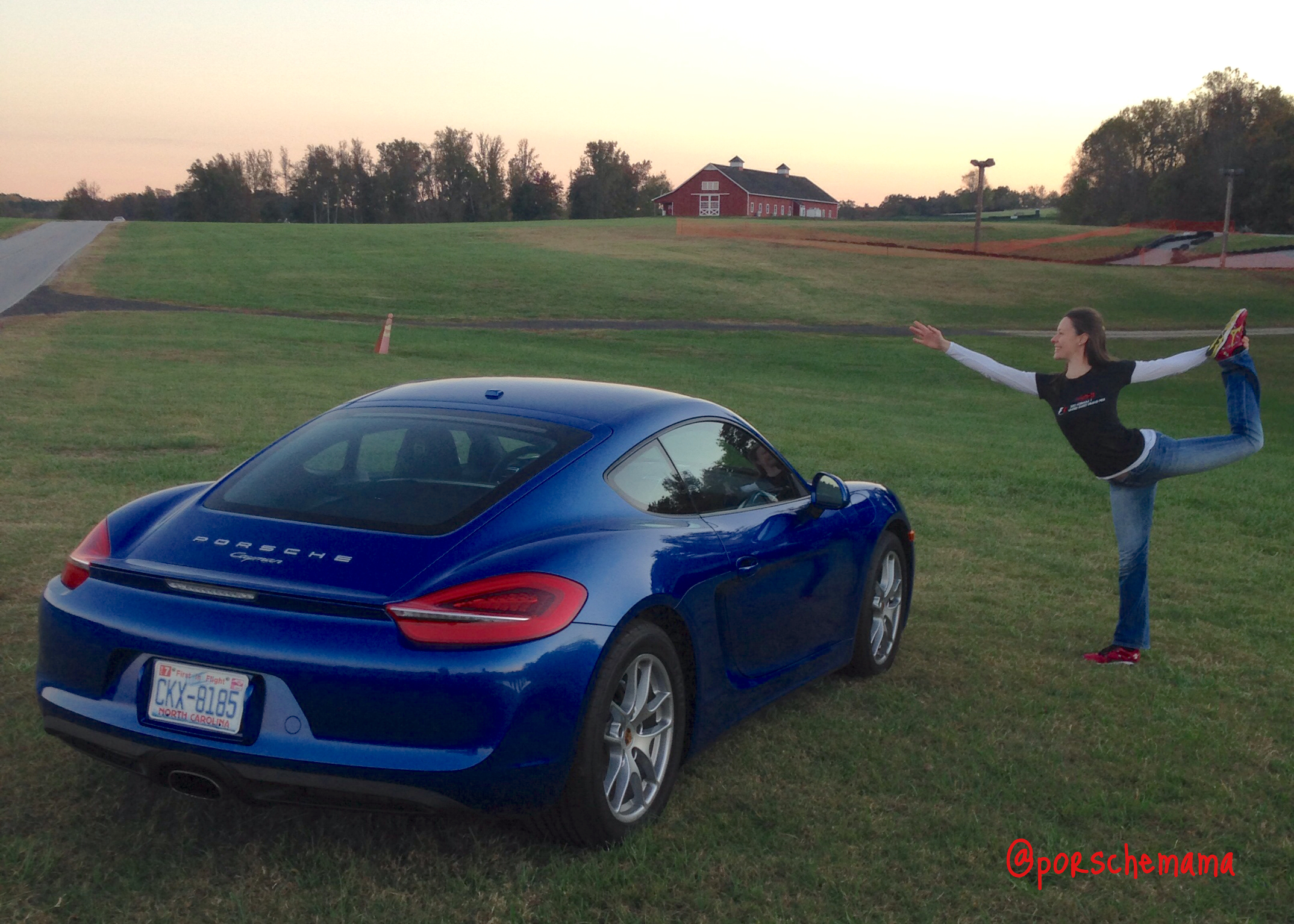 One of the best things about being part of the motorsport community is the friendships which develop over years spent watching friends and family race. Several driver friends where at the 13-Hour to race, and those who were not driving were spectating and catching up. While each of them is there to win, the camaraderie and goodwill toward other drivers is palpable. Often, friends use a racing event as an excuse to meet up — our friend Will drove in from North Carolina to cheer on my husband and keep me company (though he may have driven anywhere because he is the proud new owner of a beautiful 981 Cayman).

After the first stint in the car, my husband’s co-driver looked spent, which is rare for someone who knows how to pace himself in endurance racing. My husband, too, exited the car with cramping hands and exhausted – more so than in past endurance events. Neither of the two wanted to blame the car, but something seemed amiss. Over the next 8 hours, problems started to surface: two broken wheel hubs, a cracked sub-frame, a stuck caliper, a strong pull to the left. Each time the car failed, the crew completed repairs and got the car back out on track. Each time laps were lost and the car fell behind a bit more. And each time, the two drivers continued to get behind the wheel and push hard to finish the race regardless of challenges. The sun set and the teams and spectators settled in as the action on the track became just headlights flying by and the occasional exhaust flames on the back straight.

If you are supporting a driver, keep track of their stints and have water and (if applicable) food available for the times he or she will be out of the car. These times may not correspond with meal times, and the driver may not ask for food, but skipping nourishment can affect performance the next time they get behind the wheel. 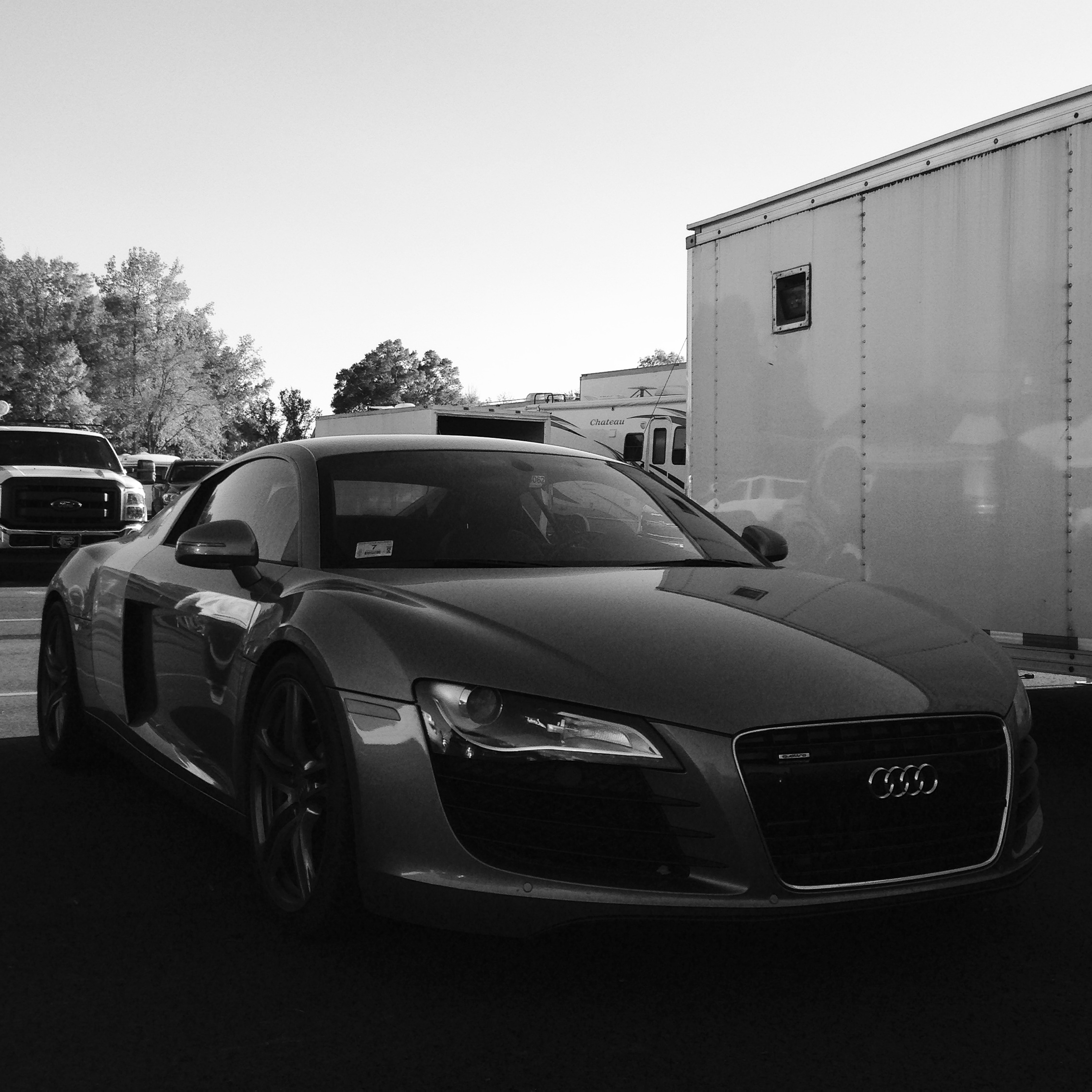 This ride got me to the hotel slightly faster than my rental.

Finally, the 13th hour arrived and VIR grew quiet again. After various repairs, handling challenges, and agricultural excursions, my husband and his teammate were able to bring the car to an 8th place finish in one piece, which I considered admirable. Neither driver was necessarily pleased with the result – every driver races to win, not to just finish – but they didn’t waste much time complaining. Instead, the discussions focused on what they could have done better, and how they would approach this kind of race in the future.

By the time it was all done at V.I.R., it was 11 pm – time to say goodbye to the race track. I was pleasantly surprised that after driving for 6.5 hours, my husband’s co-driver was willing to give me a ride back to our hotel in his R8, one of my favorite cars — proof that for those who love to drive, no amount of time behind the wheel will ever make them cry uncle. Off we went down the twisty Virginia roads, with my husband spiritedly following close behind in the Versace…at least at first.

Update: A friend has shared video proof that the Versace is, indeed, track worthy. Click here to see my rental (albeit a manual one) on track!

10 Things to Bring to the Race Track

Cash  many race tracks have no ATMs and take cash only

Sunscreen  yes, you need it! Even if you’re not worried about skin cancer, sunburns hurt. You can avoid them by slathering up every 2-3 hours

Ear plugs  because after a few laps, your ears will be glad to get a rest from 30 screaming race cars. Bonus: you’ll be able to hear your grandchildren one day 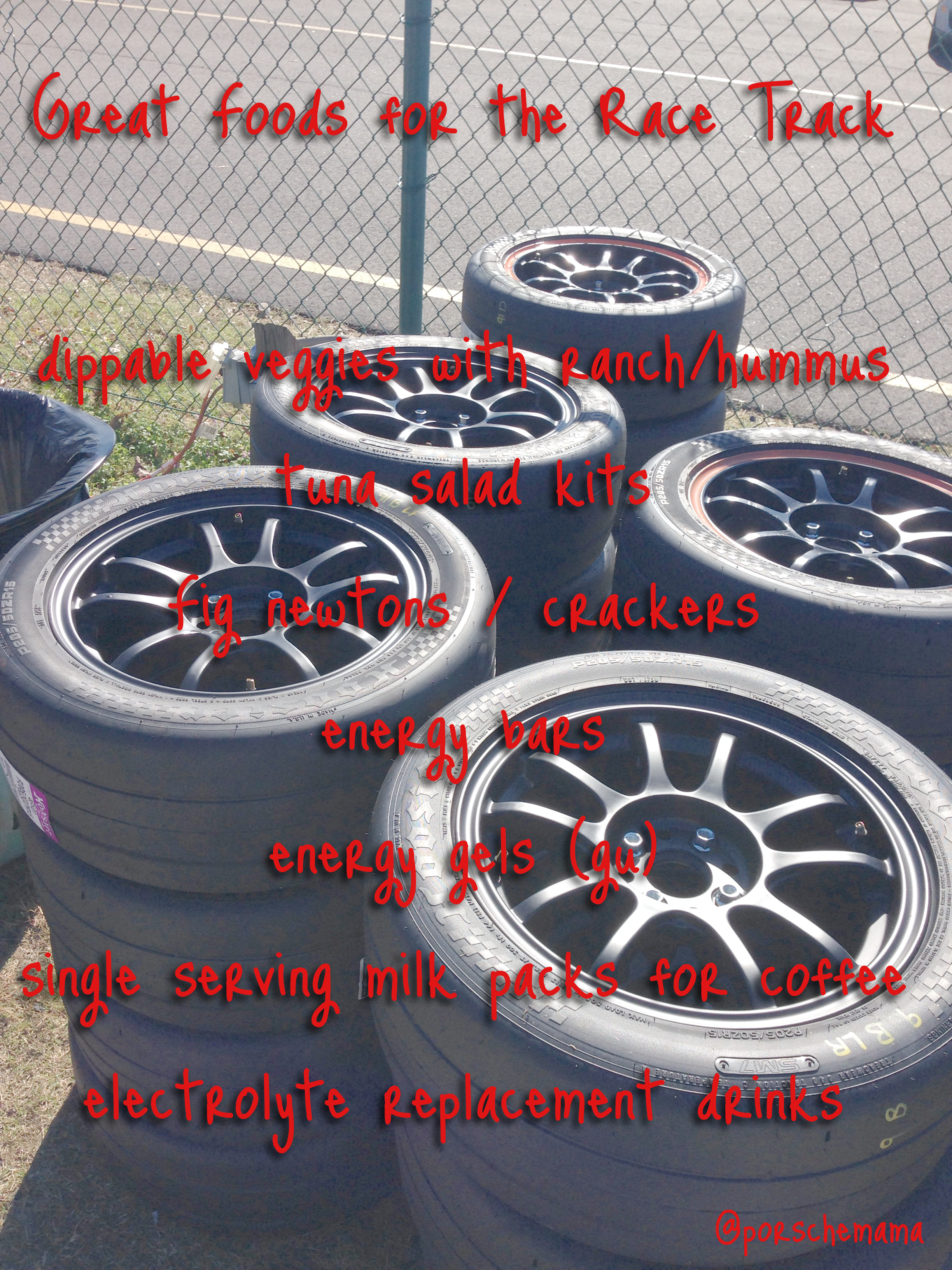 Snacks small, portable nutrition means you won’t have to be at the mercy of the track cafeteria

Comfortable shoes and clothes  Racetracks are dirty and large. Don’t wear anything you don’t want stained by grease or torn. Your favorite pair of athletic shoes will serve you well

Phone and charger  a nifty little phone app called RaceMonitor allows you to follow your driver(s) and get live timing and scoring. It drains your battery, so bring a backup

Track map  download and print a track map before you arrive, do a little research about the best spots to watch the racing from

A scanner tune in to the radio frequency of your favorite driver and stay connected throughout the race. The discussion between the driver and crew provides great insight into what is going on both on the track and with the car. Bonus: the nice headphones provide relief from the roar of the race cars

View From the Back Seat: The Kid’s Guide to Surviving Road Trips with Your Car-Loving Parents