PorscheMama » Uncategorized » The Cars and the People: Out and About at the Circuit of the Americas, APEX-style

Driver’s Tips: How to Stay Ahead of the Rain and Snow Behind the Wheel
View from the Back Seat: 5 Tips for Raising Better Drivers 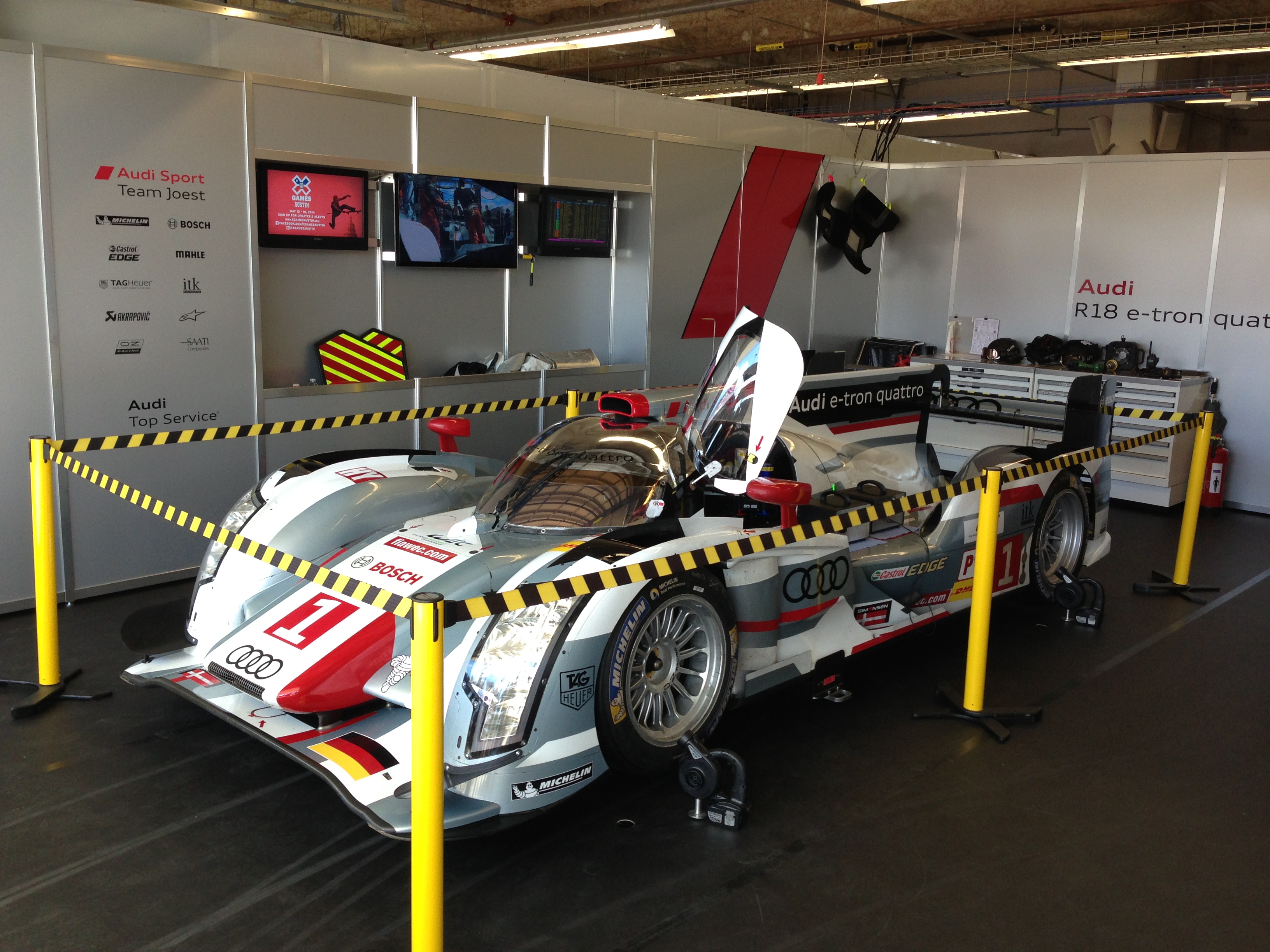 Audi’s R18 on display at the COTA garages. The yellow rope is to keep ladies like myself from throwing themselves at this amazing, LeMans-winning race car.

The confession came at the end of one of the dinners during a the three-day weekend at Circuit of the Americas (COTA). “I finally had to tell the man I was dating why I wouldn’t stay over at his place,” whispered a beautiful public relations executive. Since the conversation among the Michelin APEX community generally gravitates around cars, tires and racing, we all held our breath for the conclusion of her unusual tale. “The problem was,” she continued, “he had no covered parking available for my car. How was I supposed to leave it outside overnight?” We all nodded in tacit agreement — we all agreed the demand that one’s car stay outdoors overnight was downright unreasonable. And that’s how APEX members think.

APEX, which started out as a group of enthusiasts (called “influencers” by Michelin), keeps in touch over the APEX forum and comes together every few months at the race track. About four years ago, Michelin recognized that car and motorsport enthusiasts in various walks of life should be given more access to information about both road and competition tires (not limited to their own). Since then, APEX members have been encouraged to learn about what makes tires great, form our own opinions, and share them with our families and friends. We are a motley crew with one thing in common: we love cars, we love to drive, and we love to learn. On this particular weekend, we were at COTA for the American Le Mans Series (ALMS) / FIA WEC (World Endurance Championship).

For those of us who love motorsport, the opportunity to attend the ALMS/ FIAWEC weekend at COTA  with APEX was a huge treat.  The weekend, which includes races for the IMSA GT3 Cup Challenge (an all-Porsche series where 17-year-old Madison Snow clinched the Platinum Championship), ALMS (where American manufacturer Chevrolet’s Corvette is excelling) and the FIA WEC (where Audi’s R18s still dominating), is a race lovers’ delight. And as if all that racing wasn’t enough, COTA proved to be a world-class facility with a challenging layout and plenty of places to enjoy racing. 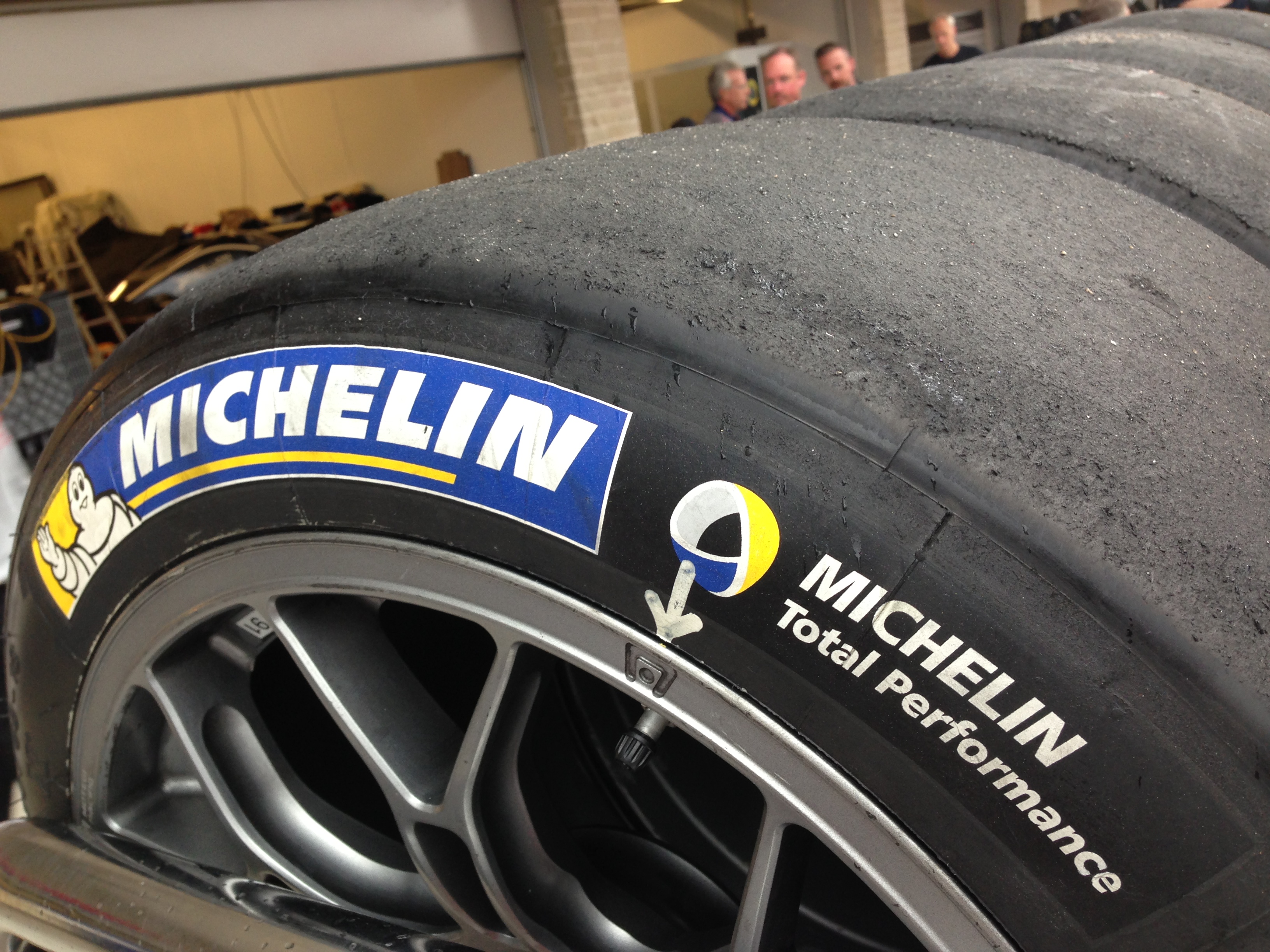 One of the thousands of Michelin competition tires spotted at COTA for the ALMS/FIAWEC weekend.

There were many highlights to our weekend in Austin. We spent three days at COTA, and during this time were able to visit the garages and pits several times, seeing the cars and teams in all stages of preparation for races. The amount of effort teams put into a 30 minute to 6 hour race is measured in months, and at the track, the teams work constantly. Drivers drive, give feedback and analyze data, engineers and mechanics make adjustments based on feedback and data, and parts suppliers make adjustments based on teams’ feedback. On Friday, for example, Michelin tire experts were spotted carving extra sipes into their rain tires, adjusting to the very wet conditions on track. There is no idle time; the adrenaline and energy are palpable and contagious. 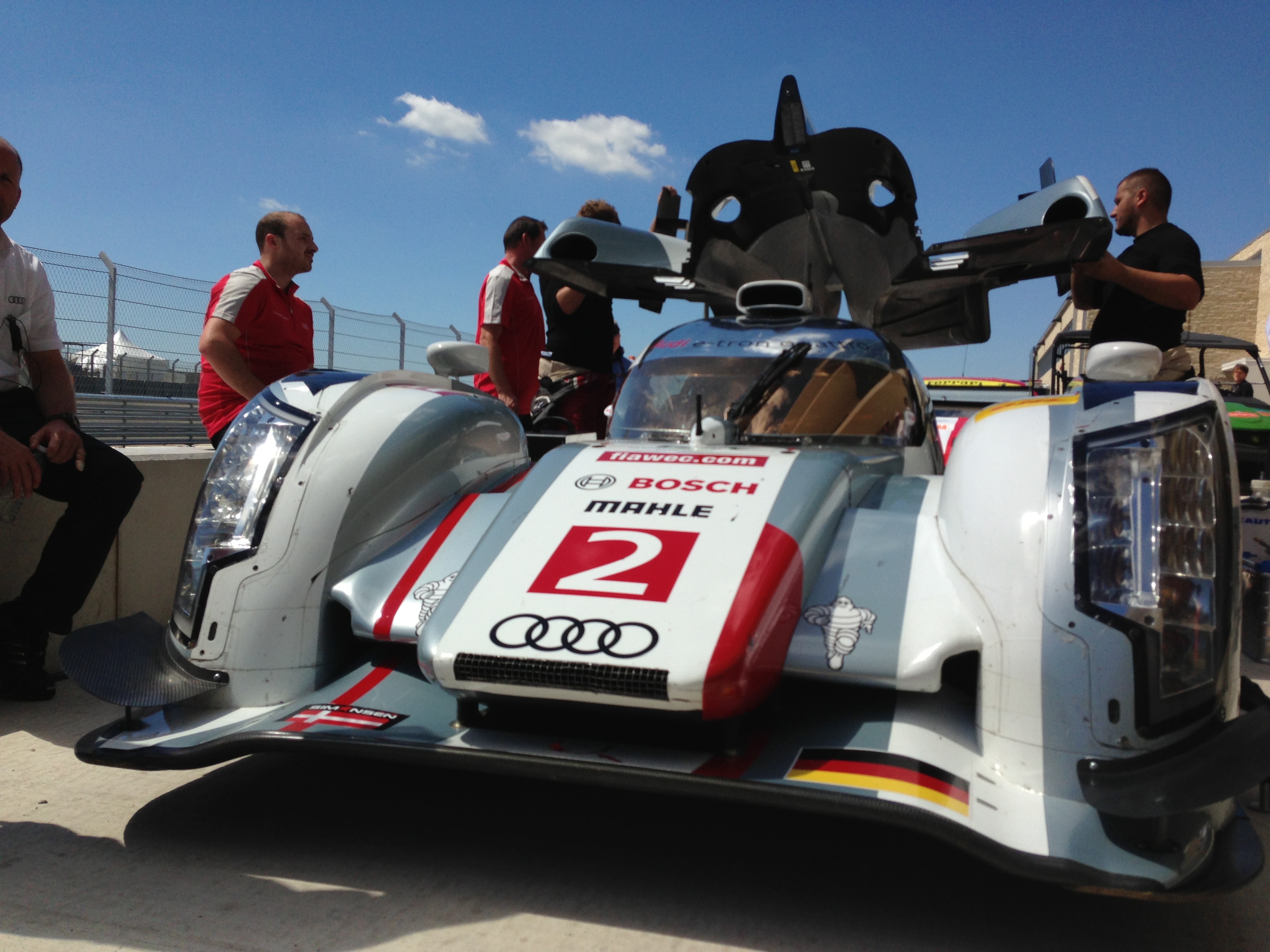 One of Audi’s LMP1 entries, the R18 e-tron quattro, in pit lane

I’ve always liked Audi’s LMP cars, but after watching the film Truth in 24, I became a huge fan of the Audi Team Joest. (On an aside, if you haven’t seen Truth in 24 yet, you should — it’s available as a free download on iTunes or you can stream it online). Getting to see the R18 e-tron quattro in the Audi garage, while the team was swarming around it, was exciting. Racing is a huge production, requiring enormous manpower, brainpower and effort. Seeing the R18 e-tron quattro fly though the esses at COTA without using the brakes, and hearing its nearly silent hum when it flew  by was smile-inducing over and over. Cheering on Audi during the 6-hour race, and seeing the no. 2 car finish ahead of the Toyota which had dominated a large part of the race was an exhilarating experience. 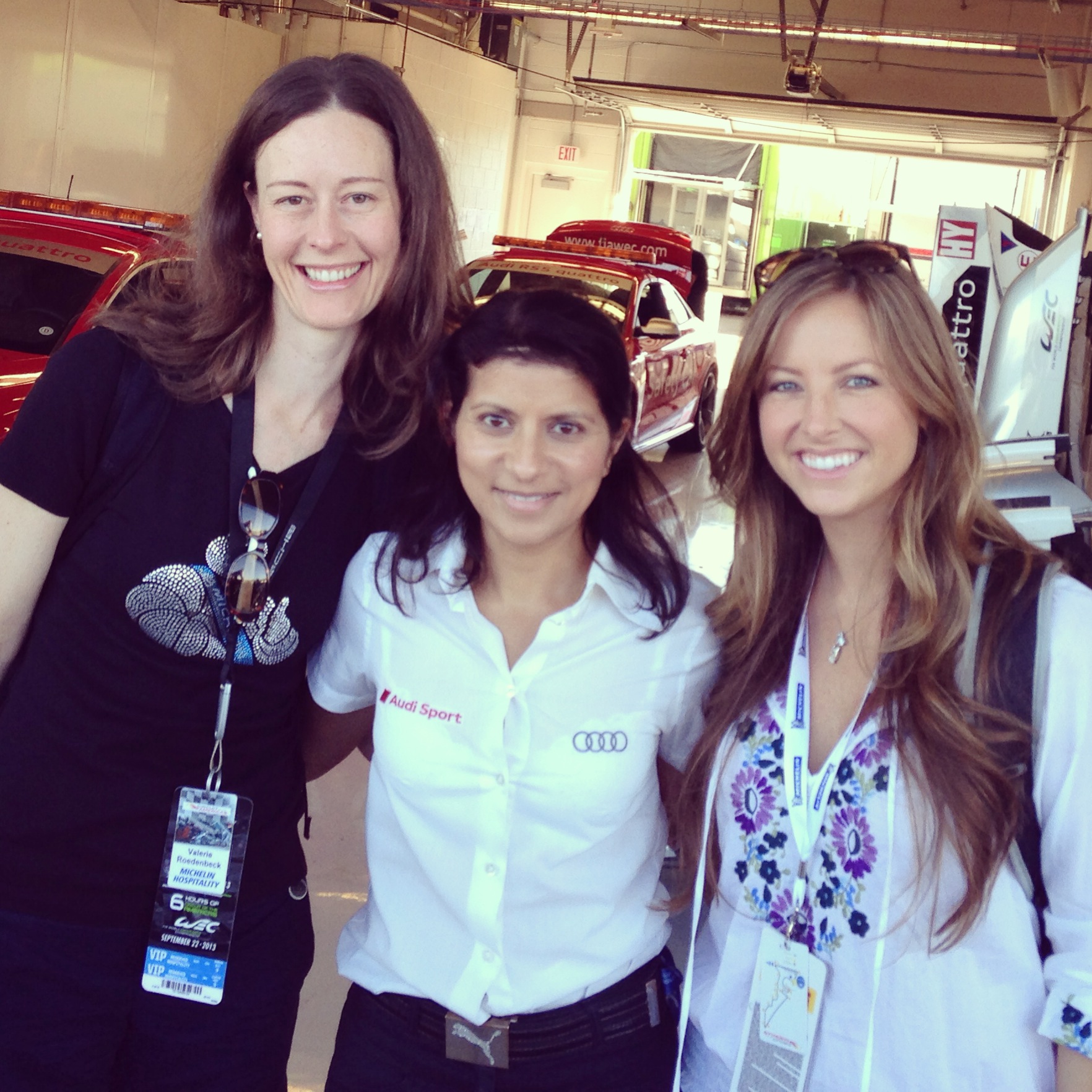 The entire Audi Team Joest was gracious throughout the weekend, smiling at fans and posing for snapshots. Even the venerable and focused Head of Audi Motorsport, Dr. Wolfgang Ulrich, stopped and posed for a photo, flashing a lovely smile. By far, my favorite moment with the Audi crew was meeting Leena Gade, Audi Sport’s lead engineer for the 490+ hp R18 e-tron quattro driven by Marcel Fassler, Andre Lotterer and Benoit Treluyer. Lena was the first woman to lead a team of engineers, drivers and mechanics to victory at the 24 for hours of LeMans (2011 with the R18 TDi) and again in 2012 (with the R18 e-tron quattro). There are few women in motorsport still, and she is one I can admire not just for her brainpower, but for achieving a position few do and doing it with grace. When we met, she was kind, friendly and self-deprecating — the kind of person you would want to have a cup of coffee with while talking about race strategy and the pure awesomeness of the team she leads.

There were many beautiful race cars to watch at COTA, but we are unabashed Porsche fans, and after months of looking at photos of Porsche’s revamped RSR, it was very cool to get to see the car up close and examine its new lines. Although the Porsches did not have a particularly successful weekend at COTA (one of the cars even had to grapple with a spectacular fire caused by fuel spilling onto a hot rotor during a pit stop – photo here), we enjoyed watching them race and cheering on its drivers. The supply of street Audis, too, was mesmerizing: track car, pace car, safety car, medical car…all Audi, all gorgeous, not all available in the USA. Injustice! 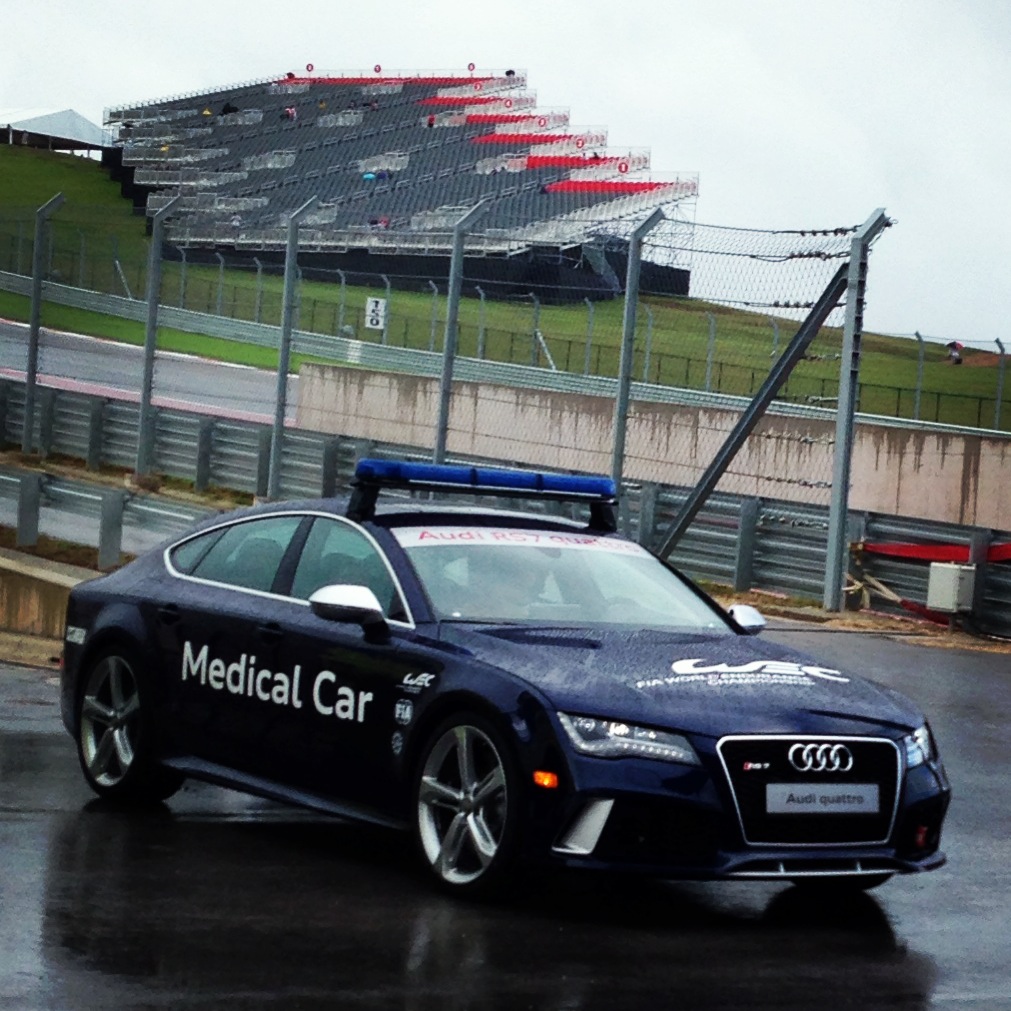 Audi’s medical car made me want to get sick.

Aside from our serious forays into the world of motorsport, there was plenty of time for silliness. I’ve been a fan of the Michelin Man long before APEX came together, but membership in the group has afforded me the opportunity to  take a ridiculous amount of photos with all things Bib; the COTA weekend was no exception. Egged on by my APEX friends (who you’ll be shocked to hear have similar adoration for Michelin’s white, air-filled, ever-smiling representative), I took photos of myself dancing with Bib and blowing him kisses. You’ll be surprised to hear the Michelin Man has strict standards he adheres to, so he can’t party too hard. But none of my colleagues batted an eye when it was suggested we get a group photo before we sent Bib off to do his thumbs-up thing with race winners.

The world of motorsport is surprisingly small. We have been lucky to interview quite a few drivers over the past few years, and have seen young drivers like Dion Von Moltke come up in the ranks. It was a blast to walk through the pits and get waves from Dominik Farnbacher and Joerg Bergmeister, to name a few, and to see some of motorsport’s most talented photographers and videographers including Bob Chapman and J.F. Musial at work. It’s always fun to catch up with folks who have been a part of APEX from the beginning, but COTA was made extra-fun by the new folks we met. As with everything in life, racing (and bench racing) is much more fun with friends, especially when they don’t just approve of your decision to include your car in wedding pictures — they applaud it. We’re already looking forward to our next adventure at the race track and the next car confession that is sure to happen when the APEX crew gets together again.

What do you love about your own car community? Let us know! 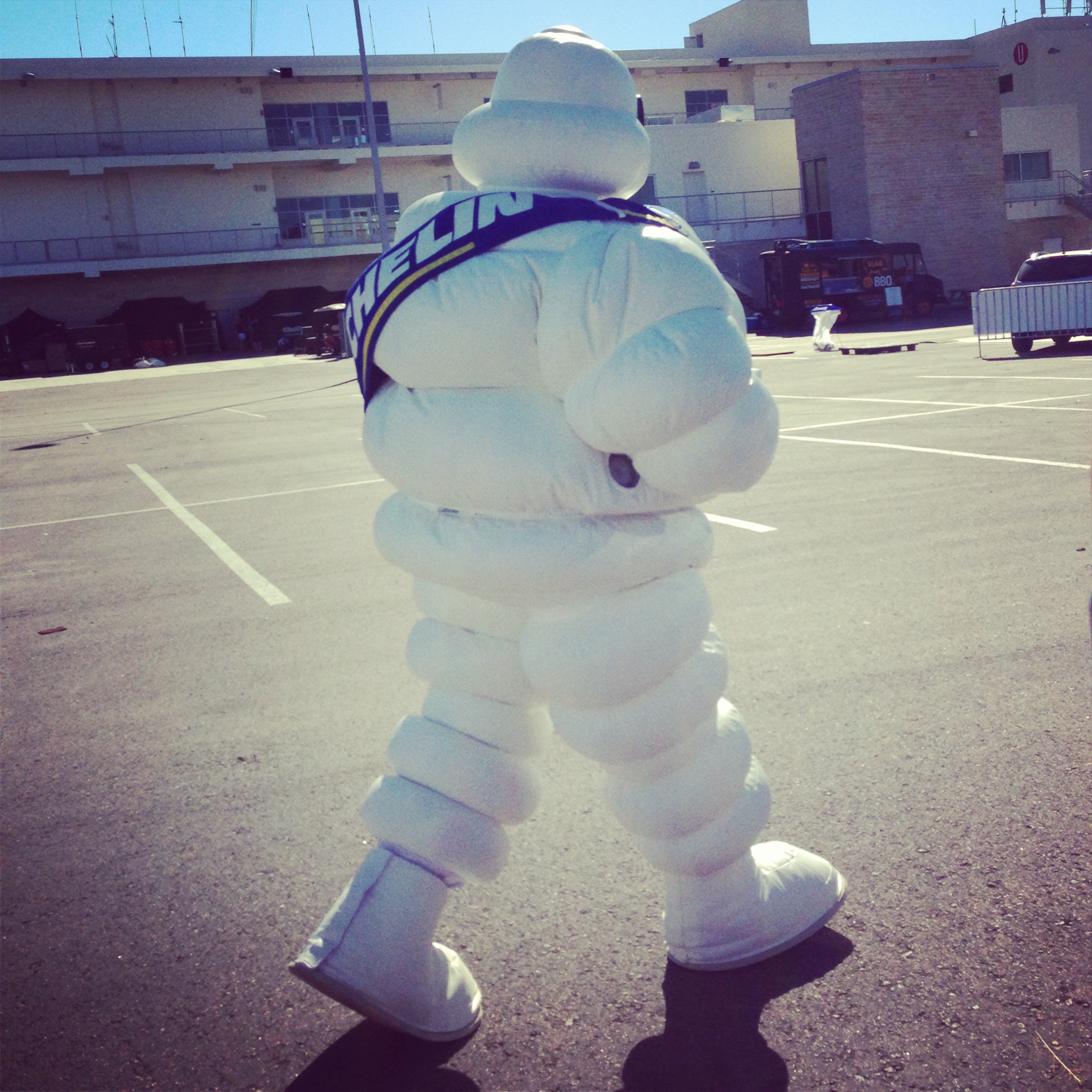 The Michelin Man heads to the COTA podium to help the winning drivers celebrate.