PorscheMama » Uncategorized » At the Very Least Have Fun: Endurance Road Racing Tips from Amateurs and Pros

Shaped by Your Ancestors: Genes and Emotional Memories
See Beyond Fear, Parent Bravely

At the Very Least Have Fun: Endurance Road Racing Tips from Amateurs and Pros

Endurance racing holds a special place in the hearts of both spectators and drivers, though one has to wonder why. What would motivate a driver to want to spend several hours in a hot race car maintaining the highest form of focus and consistently turning laps for hours? What kind of person brims with excitement at the prospect of spending several hours behind the wheel, inhaling fuel fumes while stuffed into a somewhat-fitting shared seat, deprived of drink and food and sweating through layers of fire retardant clothing? Why would spectators want to spend several hours at a race track, deafened by running engines, suffocated by exhaust and nourished by questionable concession stand goods and alcohol? Makes no sense…but, somehow, just writing this piece is making me long for the experience.
Endurance racing dwells in the emotional–not the rational–realm. The challenge of building and maintaining an engine, chassis and components to survive several demanding hours with two or three different drivers at the helm is the siren song of the engineers and mechanics. The crafting of a race strategy which is both precise and adaptable challenges the crew chief and race engineer. Showing up for an event which promises so many unpredictable variables energizes drivers. Together, it all adds up to a compelling symphony of motorsport. 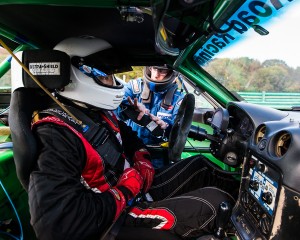 Drivers share information at the beginning/end of a stint.

It goes without saying that the pinnacle of endurance racing – The 24 Hours of LeMans – is not available to most drivers. But thankfully, for amateurs who hear the siren call of the sun setting while they are dodging Cup Cars behind the wheel of a Spec Miata, there are plenty of opportunities to join a team for a more accessible enduro. Such is the case with one of the best endurance races at the club level, SCCA’s Charge of the Headlight Brigade.
Held at Virginia International Raceway (VIR) in late October each year, the 13-Hour Charge of the Headlight Brigade is one of the most popular endurance races held in the U.S., both for its location and for its accessibility to professional and amateur drivers in various car classes. Enduros like this are a great place to see established drivers like Randy Pobst mingling with up-and-coming talent and amateur drivers, chatting about car setup and strategy before their own stints begin. At the VIR race in 2014, I asked veteran Randy Pobst to sum up his enduro strategy. He smiled in his affable way and replied, “go as fast as you can while keeping incident risk and car wear low.”
Randy’s advice sounded simple enough, but after watching the complex circus that was the 2014 13-Hour, I figured there had to be more to endurance racing, so I reached out to several drivers who had participated in an endurace race and asked them to provide their pearls of wisdom for drivers considering a stint – or a return – to endurance racing. Below is what they shared.
Teamwork 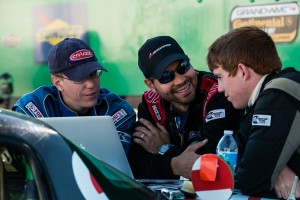 Drivers compare data during testing before the VIR 13-Hour

Endurance racing generally requires multiple drivers for each entered car. Regardless of how much seat time each driver gets, endurance racing is a true team effort. As many race car drivers can attest, sharing is not something often taught in race car driver kindergarten. But regardless of how little drivers want to share the car, once they commit to doing so, switching to the team mentality is key to the car’s success, says Dempsey Racing and Freedom Autosport pro driver Tom Long. “It’s important not to get too caught up in your own stint, racing scenario/sequence, etc. Using up the car or risking a pass is just not worth it. You have to give your team the best chance to make it to the end.”
The team mentality extends beyond the decisions made behind the wheel. “Being the fastest driver in the car is great but not as important as being consistent and fast–and faster than the competition,” says amateur driver Christian Maloof. “Check your ego; if your teammate is faster, ask them what they are doing and look at the data so you can improve.”
One bit of advice all drivers agree on: when choosing a team to drive with, reliability is key. “The winning team is usually the one which spends the least time in the pits,” affirms Yiannis Tsiounis, 2012 Spec Miata NASA Champion.

Patience & Consistency
If there is a recurring theme to success in enduros, says Tom Long, it’s “always think with the end goal in mind.” While traffic management and consistency are a big part of qualifying and racecraft in any race, nowhere is it more crucial than in an endurance event. “ It’s never about the fastest lap in endurance racing,” says Long, “but rather about the average pace as you manage traffic.”Giving up a little may sometimes feel like an eternity, but if you time it right, that traffic scenario could pay off in the longrun when the car returns the favor,” adds Long. Indeed, it is not unusual for drivers—particularly those in momentum cars like Spec Miatas—to help eachother by bump drafting down the straights.
For newcomers, pacing is one of the hardest things to master. “Driving with a sprint race go, go, go! mentality will quickly get you in trouble,” says Todd Lamb, endurance racing veteran and 2007/8 Spec Miata National Champion. The variables are always greater at enduros, with “drivers sharing the track with much more and much less talented racers, and much slower and much faster cars.” To achieve success, Lamb says, the driver’s mentality must change to long-term survival. “Always leaving an out when making a pass, avoiding low percentage moves, and in general being ready for another car to be on your racing line with no warning, will significantly increase the odds of making it to the end of the race.”
Spec Miata driver Phil Mather agrees. In the 2011 VIR 13hr, Mather says “I had two cars battling behind me fairly early in the race. They were getting pretty hotheaded with each other, so I let them by, and they started to get door-handle-to-door-handle. I backed off a little and sat back to watch the show. I’m glad I did because they ended up wrecking each other into the next set of turns.” Mather finished 1st in class (9th overall). 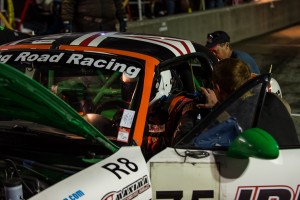 As with any long-term effort, consistency is key to success in endurance racing. Driving consistently, says Long , is “one of the most important traits” a driver can have. Consistency serves two purposes: It enables the team to manage “fuel mileage, brake wear, pace, etc.” and it renders the driver more predictable to other cars on track. “Passing or being passed on the same side, doing the same thing, lap after lap, not only as one driver, but as an entire co-driving team can make you more predictable as a “car” & allow for other cars help you and each other more efficiently.” Mather agrees. “You don’t need to drive every lap at 10/10ths, but drive every lap the same with no mistakes. Let the mistakes happen to other drivers.” Because, as Rick Mears said, to finish first, you must first finish.

“Enduros are long and all sorts of things can happen,” affirms Tsiounis “Stay with it and don’t lose hope” With consistency, “P7 early in the day can easily become P1 at the checkered [flag]. “

Adaptability
Something drivers and crews can always count on at endurance races are the unpredictable challenges that emerge as the race progresses. Seasoned enduro veterans know that adaptability to these variables – be it the car, track conditions or the team—is a crucial part of success .
“From a driving perspective, enduros are a great opportunity to learn to drive around handling (or even mechanical) issues,” says Lamb. “You’ve got what you’ve got, and stopping for repairs isn’t in the cards, so you’ve got to find a way to go as fast as the car will allow in its current condition.” Mather concurs. “Let the car do what it wants, don’t fight it. Maintain your momentum as best as possible with minimum correction, don’t scrub the tires, and make a mental note for the next lap.” 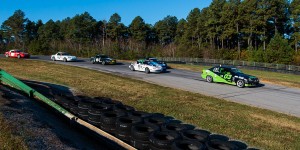 It is crucial for the team to deliver feedback clearly, and for the driver to understand and execute them. Says Long, “an endurance race can have many ups and downs. It’s critical to understand how these changes can affect the team plan, and what might be expected of you as a driver. This can change from stint to stint. Conserve fuel, pickup pace to catch the next position, conserve brakes, watch for temp issues–you never know what will be thrown at you. Ask the right questions & have the right info from the team before getting in the car for your stint. “ Balancing the car’s ever-changing state and adapting to changing track conditions is a requirement for succeeding at enduros. “Absolute speed is a tool, and not a goal,” says Tsiounis. “If all drivers are fast and drive the car to the limit all the time, you are bound to have mechanical problems.” Instead, says Tsiounis,” good and fast drivers use their skill to position the car in the lead pack, the right car draft, or wherever else it needs to be. They save fuel without abusing the car and without losing too much in lap times do help the outcome.”
As conditions change and challenges emerge, says Lamb, “a driver learns to feel the car. With such long driving stints, a driver can get into a rhythm and, while paying very close attention, feel how the car and track evolve. Tires fall off, drivers fatigue, the track gets slick, etc. While things may seem the same from lap to lap, over the course of a long stint a lot changes.”
Within all this unavoidable change, the yellow flag can be the endurance racer’s best friend, says Randy Pobst. “A full course yellow means catch up to the pace car as fast as you safely can. While driving slowly past the incident is key, drive near race pace everywhere else until you catch the end of the line.” 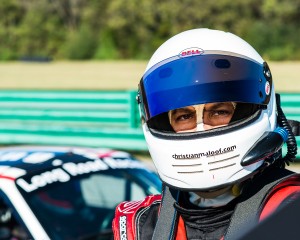 And, most importantly, Remember Why You Race
Racing is, by nature, a competitive activity, and those who participate don’t take too kindly to finishing anywhere else but on the podium. While it is easy to get lost in the result, says Maloof, “Remember there is a reason you are doing this. Have fun!” Focusing on the highlights of the race and using the experience to prepare for the next time is always a great strategy. “For me, racing in almost total darkness at night is right up there with great track battles. At VIR, I was able to combine those two, and it was the highlight of the race for me.” Tsiounis, his 2014 13-Hour co-driver, agrees. “A relaxed attitude of we are here to enjoy the race and play is the best way to avoid mistakes, succeed, or at the very least have fun even if you fail. And if you fail, try, try again!”

How are Driving and Yoga Alike? Two Disciplines and The Principles that Bind Them