At the Very Least Have Fun: Endurance Road Racing Tips from Amateurs and Pros
What Happens When Parenting Doesn’t Go According To Plan? All Good Things, Eventually.

Some time ago, our family settled into the basement couches to watch a Jackie Chan movie, The Accidental Spy. We love Jackie – he’s funny, he’s athletic, he’s from Hong Kong. By now, we have watched most of his movies and feel they are ok for our 10-year-olds to watch, so we didn’t think to check the Common Sense Media review for our choice. Turns out we should have.

In a way, The Accidental Spy was just like any other Jackie Chan feature: he’s the hero, there are villains, lots of martial arts and stunts (good) some explosions/stuff blowing up (ok), mild nudity (a rear end). But something else rears its ugly head in the movie, and I was not ready for it: drugs, addiction, and the impact it can have on those around it.

We have watched other movies with our girls where drugs/drug use is implied, but the subject has been glossed over enough where they haven’t asked too many questions. Generally speaking, we have told our girls that drugs can be legal or illegal, and that when used when one is not sick, they can lead to addiction and great harm. I know this is an oversimplified way of dealing with a very complex subject. As they grow, the plan is to encourage them to ask questions and examine the subject more deeply.

In The Accidental Spy, a young woman who Jackie rescues – and falls for – is a drug addict. Although the movie is presented as a comedy (and at times it is comedic), this young woman is shown agitated, sweaty and pale when she needs more drugs, her arm has track marks, and she ends up dying in a train station restroom.

The scene came on quickly and the girls immediately started asking questions. “Why is she sick? Why does she need the drugs? Where is she going? Is she dead?”

I was kicking myself for not having checked the guide for the film. I was probably the most agitated person in the basement as my daughters continued their string of questions, my discomfort level growing quickly. I tried to provide good answers to their questions, but their curiosity was pushing into areas I didn’t want to go into with a kid under ten.

As they sensed my discomfort, the girls pushed even more. My children are curious and intuitive, and they love pushing the limits. Why do those drugs hurt you? What makes a drug good or bad? I wanted this Q&A to end and started losing my patience. Eventually I said, “I answered your questions and that’s enough of that!” and shut the movie off. Then came the inevitable, “why are you mad?” 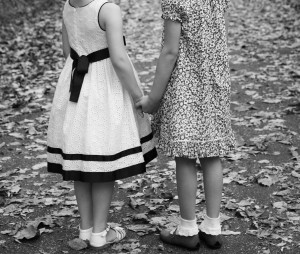 Later, when I had a moment to think, I was frustrated with myself for not managing our movie choice better. But then I realized what was happening: the girls had pushed me into a place that is very, very uncomfortable for me.

Our disastrous movie night reminded me of an important lesson. So much of how we parent is reactive precisely because it taps into our fears. When our child pushes us to a place we are uncomfortable in, we react defensively. (We do that with adults, too, but it is easier to get away with it when it is your kid asking you questions and you can shush them before things get too uncomfortable). In my case, I have no trouble talking about the birds and the bees with my girls, but subjects like drug addiction and eating disorders – two areas where I have no firsthand experience yet deeply fear that they could be affected – are difficult for me.

I’ve never used drugs recreationally, and have only seen people use them twice in my life. Both times I chose to distance myself because from the time I was a kid, my mother explained “drugs are used by people to escape their feelings.” I am not sure if this is an accurate statement, but it worked to keep me from experimenting. I never used, I have no interest in using. I have no familiarity with what drugs do other than from asking friends, and from having known a person whose life came unraveled from using. Now that I am a mother, I want nothing more than to keep my girls safe from harm. The thought that my adored girls could come into contact with drugs and come into harm’s way because of them frightens me to the core. Some of this fear is probably rooted in the fact that I have so little first-hand knowledge about the world of drugs that I expect the worst. I don’t know what to say when they ask questions. And yet, I deeply believe I have to leave the door open for them to talk to me about anything they want to, whenever they want to. I want to parent them so that they know they can come talk to me without fear. Even if I don’t have the answers.

I went back to the girls and asked them if they still had any questions about the movie. A few more came up, and I tried to answer honestly, including telling them why I had become uncomfortable. I can’t be certain I covered all the bases (does anyone?), but at least we gave it a try.

The next time the girls start asking difficult questions, I am going to try to remain aware of why I am growing uncomfortable. Is it my own fears? Is it that I am terrified that harm may come to them? Whatever I do, I can’t let my own fears get in the way of us discussing the very difficult and complex subtleties of life. How I communicate with my daughters is how they, in turn, will learn to communicate with others. Unless I encourage honesty and the asking – and answering – of difficult questions, they will learn to avoid difficult subjects.

But in the meantime, no movie shall be screened before Mom consults the Common Sense Media App first — God knows I need time to get my ducks in a row before any more questions come up.

What Happens When Parenting Doesn’t Go According To Plan? All Good Things, Eventually.