To Wednesday, My Least Favorite Day of the Week
Kindness is Contagious (Even at the Race Track)

Imagine a place with no cellular service, no wifi (ok, really terrible wifi that’s not really worth using – so close) and where someone peering into their phone is a rare sight. Now add to that a bucolic setting that reminds you of the camp where you spent summers as a kid, but instead of tug-of-war games and bonfires, there are morning yoga and meditation sessions and evening concerts. That place is the Omega Institute in Rhinebeck, a place so silent that birds wake you up quite a bit before the sun shows up every morning. 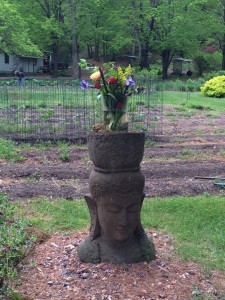 photo of the Omega garden by Billi-Jo Horvath Murphy.

At Omega, I spent five days with 30 or so women who I quickly recognized as my clan. All of us came together to participate in the Off the Mat, Into the World (OTM) intensive, a five-day workshop led by yoga teacher/activist Seane Corn, yoga teacher and trauma/somatic therapist Hala Khouri, and artist/musician Suzanne Sterling, three friends and colleagues linked by their passion for social justice and healing. The week-long OTM workshop brings together yoga, meditation and self-inquiry along with “practical tools for communication, organizing, and collaborating.” The overarching goal is to help attendees combine the teachings of yoga with their passion for service and translate it into action for the benefit their communities.

Though I had wanted to attend the OTM intensive for at least three years and had read about it, I wasn’t sure what to expect. I had done several trainings with Seane before and had benefitted immensely from her ability to create a connection between yoga and where pain and trauma are held in the body. (I often credit Seane with jumpstarting a myriad of positive changes in my life seven years ago by putting me in pigeon pose and leaving me there to think for what felt like 150 breaths). I knew and respected Hala’s therapeutic work from OTM’s online trainings, but I did not know Suzanne at all. I figured the intensive would include yoga, deep thinking and networking. Turns out I got that and much, much more.

Seane, Hala and Suzanne have formed a powerful coalition (built on the feminist model of lateral management) that doesn’t just embrace differences – it celebrates them.  Their friendship is as evident as their commitment to the work they have been doing together for over a decade (and long before separately). Under their tutelage, the women in attendance at the intensive started to slowly open our hearts to one another. I discovered the three OTM leaders truly know their craft: if Seane, lovingly nicknamed “the grim reaper of yoga” doesn’t get to your heart through movement, Hala’s rational and gentle prodding does, and if both of those fail, Suzanne’s drum and voice finds the visceral pain that everyone inescapably holds inside them. It is practically impossible to leave the group on Friday without having delved very deeply into what hurts you, moves you, challenges you, needs to be changed in you, and ultimately having come closer to knowing what you are moved to change in the world. 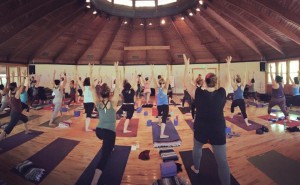 A daily practice seals the inquiry and growth of the day. Photo by Off the Mat, Into the World.

I can’t recall the last time I was surrounded by more impressive women gathered in one place. Most attendees were yoga teachers who also worked in various fields of service including social worker, art therapy, and non-profit leadership. As we got to know eachother during the week, women shared their pain, joy and what drove them to be a force for good in their communities. We practiced yoga, worked hard, sang and danced, created art, wrote, laughed and—yes—cried together. It was impossible not to be moved as women generously shared stories of trauma, pain, loss and longing with the group.

By far, the most moving part of the experience was the support these women afforded eachother. It is a thing of beauty to find yourself in a place where you know you are not being judged by your looks, accent, interests, sexual orientation, ethnicity, religion or any other of the myriad of things which we are routinely judged for as we grow up and inhabit the world. It was a wonderful and easy rhythm to move to.

After the workshop ended and I came home to my own bed and family, the re-entry into “the real world” was swift. There was the lawn to mow, six laundry loads to get to and an empty fridge requiring a trip to the grocery store. There was my husband, back from the race track after his first Spec Miata event of the year.  There were the girls and their 11-year old intensity focused on friends and soccer. On our first night together, one of the girls kept us up all night coughing, and the next day – a school and work 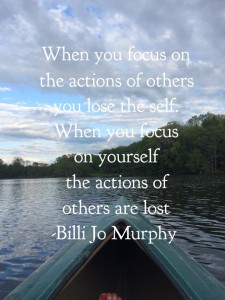 day – we were all moving slowly while ticking off the to-do lists, making lunches, doing homework and getting to soccer practice. And just like I had fallen into the rhythm of Omega, I easily fell back into the rhythm of my life.

Coming back home to my space, my husband and our children was not difficult at all – I love my disorganized, messy, loud life very much. But returning from a week where so many people kept an open heart and mind and treated my intentions with love and patience, it was quite difficult to step back into the more challenging interpersonal realities in my life. The reality that I don’t see my girls every day, so I’d have to wait to hug them and ask them how their week at camp had gone. The reality that I’d have to wait to give them the tiny bead bracelets I had placed on our altar for my OTM clan to bless as we moved through one last practice together. The reality that not everyone sees other humans as people who are doing their best, but instead see them as adversaries and enemies because they don’t practice the same religion or hold the same beliefs when it comes to raising children.

Returning from OTM, I wished the “real world” was more like the world we inhabited at Omega for one week. But I was also reminded that I can stay on the path to becoming a kinder person and improving my world by looking inward instead of reacting to the parts of my life which don’t go exactly as I want. And just as I had started to struggle with this, one of the women I now call my OTM sisters posted a meme which offered me a much-needed, sweet reminder. Her post may have only been a little meme, but it had the sound of Suzanne’s powerful drum and the singing voices of my OTM sisters behind it. I smiled and remembered that my clan is out there, and together we can indeed make this a kinder, more compassionate world.

How are Driving and Yoga Alike? Two Disciplines and The Principles that Bind Them