PorscheMama » Uncategorized » It’s Not You, It’s Me: The Secret to a Happy Life Revealed (Again)

It’s Not You, It’s Me: The Secret to a Happy Life Revealed (Again)

Every so often, something happens and I am reminded of the “secret” to a happy life. (I say reminded because even once you figure this secret out, you’ll forget sometimes. Don’t worry — we all do). I got one such reminder a few days ago, on the weekend of the SeaWheeze lululemon half marathon, a race I had signed up for six months earlier and prepared for over the last four.

A few days before the race, everything that could have gone wrong already had, from nurture to nature. Unlike previous races, I had not been as diligent following my coach’s training plan; life had gotten busy over the summer and I had (too) often run less miles than Coach Bill‘s training plan suggested. My long runs had generally been laborious and not really enjoyable. The anticipation I often feel while I train for races was not there this time and I found myself dreading the long runs and hanging my head before heading out to trudge though 8, 10 and 12 miles. The runs in between hadn’t been anything to write home about – not great, not awful. Just bleh. “It’ll get done, but it won’t be pretty,” I told my husband after my last long run two weeks ago, adding, “this may be my last one – I may be done with long distances.”But hey, at least some mileage was in there and I knew I would finish.

But that was before I caught my first virus of the season three days before the race – a particularly unfriendly one which took up residence in my respiratory system, putting my nose on strike and my chest in a vise. Strike two, fine, I thought, I’ll walk if I have to. But wait, there’s more: I had forgotten it was time for my ladies’ holiday too! (TMI, I know, but you’ll definitely feel sorry for me now. Heck, I felt sorry for me). 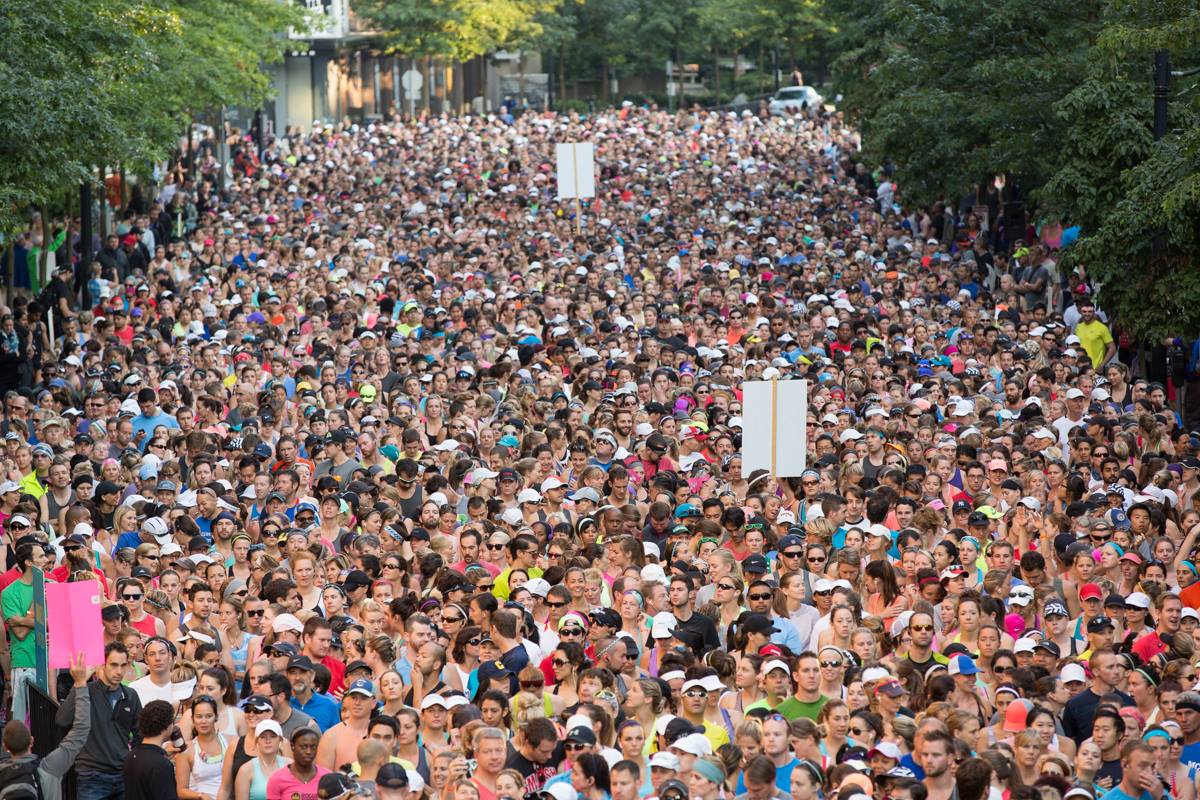 A morning with 10,000 of your closest friends can’t be anything but awesome. (photo via SeaWheeze Facebook Page)

We made it to Vancouver, one of my favorite cities of all time. You’d think I would have the common sense to rest the day before a half-marathon, but Vancouver is just too awesome to sit still, and there were way too many fun things to do associated with the SeaWheeze. So instead of resting our feet, my husband and I spent several hours standing in various lines, practicing yoga and searching for a great place to carboload. By bedtime, my feet felt like they had already run a 10 k. Oh, well.

Fast forward to the starting line – 7 a.m. on a gorgeous, sparkling clear and cool day surrounded by 10,000 high-energy runners. I resolved to enjoy this beautiful day, come what may. My husband kissed me goodbye and darted off to start with the 1:30-2:00 pace group wave. I landed in the 2:30 corral by accident and thought, “why not?” I was surrounded by excited people (mostly women), chatty and jittery like myself. I find the energy in the slower-pace corrals is very different from that in the corrals out front. The slower-paced folks tend to be humble–sometimes even self-deprecating. We are the people who will apologetically say, “um, no, I am not a real runner,” as if we’d stumbled into the event by accident (whoops, sorry, I just ran a half marathon by accident! Pardon me!). We are the kids who used to hide under the bleachers during P.E. and dreaded the week when the President’s Fitness Test was administered because there was a high chance we would embarrass ourselves. The 2:30 corral felt like home to me, so I stayed there. 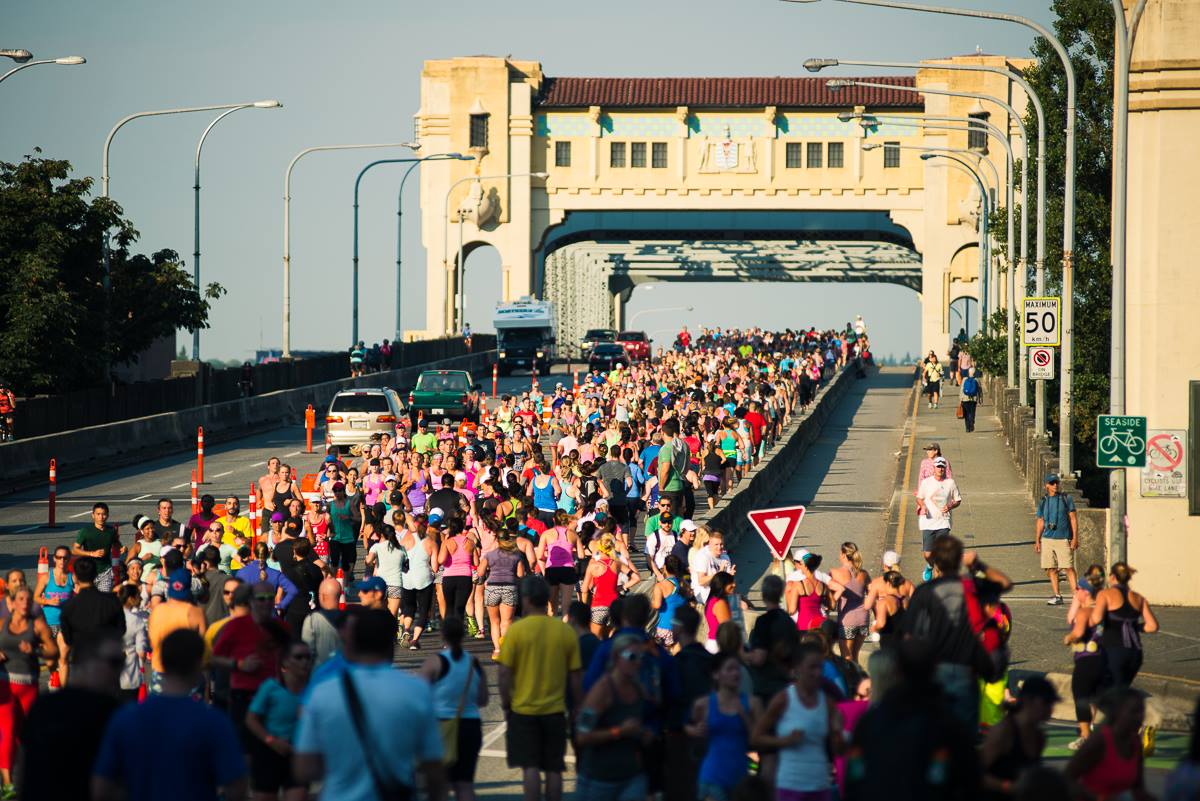 The gun went off and I told myself, just take it easy and see how it goes. Let go of expectations and have fun. You are here, it’s gorgeous, everything is perfect. Do any of you have a mental dialogue going when you tackle things that are challenging? As someone who was not naturally athletic as a child, I often have a running dialogue in my head while I exercise or practice yoga. You can walk any hill you want, but you have to run all the flat parts and downhills, I told myself. This trick must have worked, because once I started I never stopped running. I ran a steady race, challenging myself to stay with it. And on the few occasions when things got hard – when my head hurt from the congestion, or my feet hurt at mile 10, or when I could barely breathe on the last mile – I told myself you won’t feel like this forever. This will be over and you will be glad. And it didn’t, and it was, and I was so very glad. I got emotional at the finish line (damned marathons, it happens every time), but it was absolutely joyous emotion of the best kind.

So how fast did I run this race? I have no idea. My Garmin GPS watch was on crack, displaying speed erratically throughout the race, so I can’t trust its data. The official race chip (which I wore on my shoe) registered when I finished the race, but not when I crossed the starting line, which means my official time is 0:00:00 (the run went by fast, but not that fast). 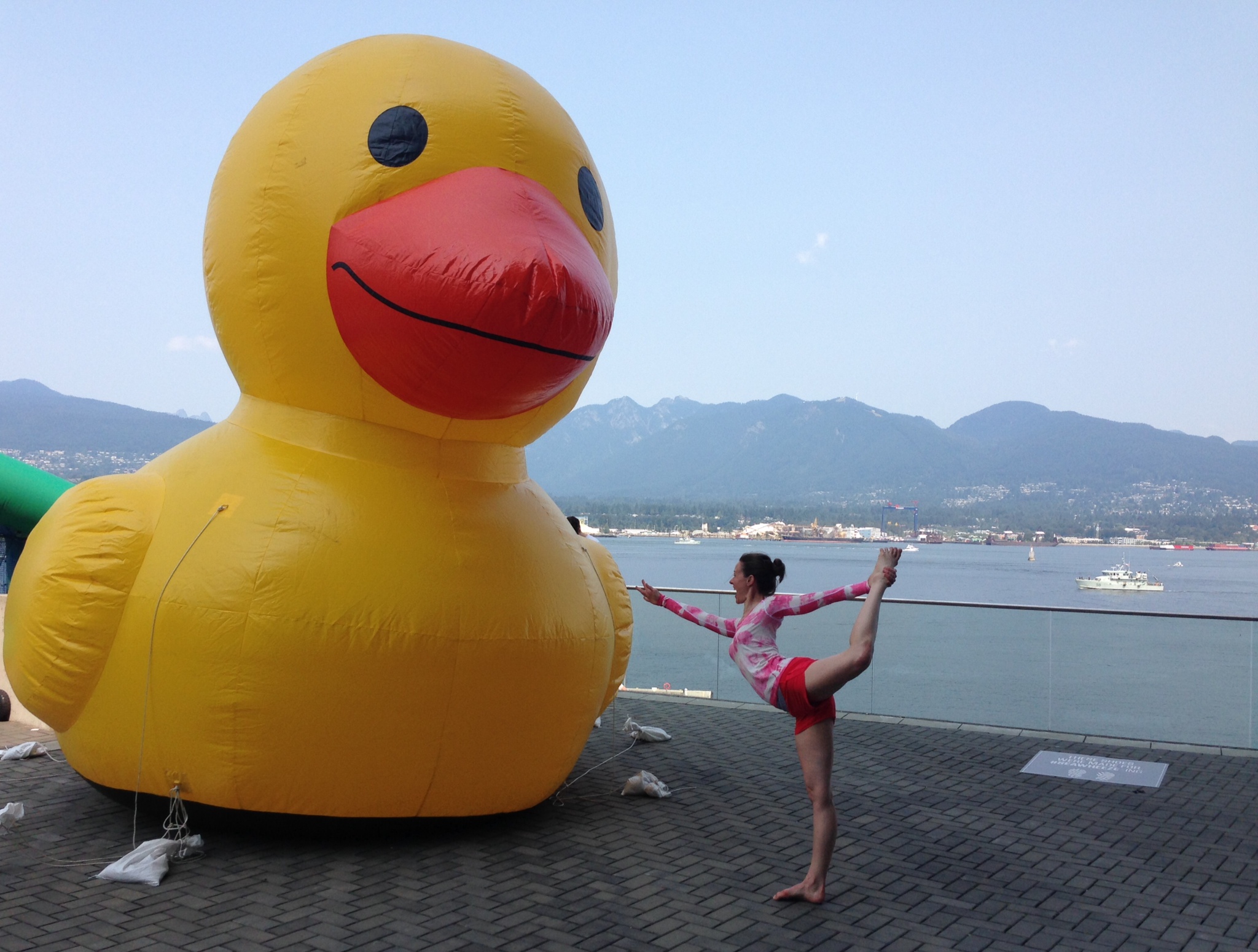 One more reason to smile: a giant rubber duckie at the SeaWheeze expo, Vancouver and outdoor yoga.

My race time really doesn’t matter. For me, the highlight of SeaWheeze was not just that I was able to stay positive the entire time I ran, but that I was also able to channel that encouragement toward other people running as well. I encouraged runners who struggled by telling them they were almost there, they could do it, they were very strong. I even found myself telling a young woman who looked like she was about to give up on herself in the last mile, “you got this! Kick my butt, you can do it!,” which made her laugh and start running again. Encouraging others magically fueled me even more; maybe because there is more power in numbers.

In spite of all the things that had gone wrong before this race, everything was just as it should have been and I was exactly where I should be. Some of us were made to be fast and win races, and some of us were made to run with the slower folks who have to talk to themselves just to get out there and toe the starting line. I am one of the latter. I now understand that what holds you back in life is not chance, fate or your body type. It is your mind. For the first 20 years of my life, my mind convinced me I was not a runner, not athletic, not fast enough, too heavy. And then I stopped listening to that voice and listened to the voice that says, who cares if I am not athletic? I’m gonna do it anyway. Who cares if your body doesn’t look like what you think a runner’s body should look like? Your body is a magnificent machine that works—you just have to give it the opportunity to learn how to (a.k.a.training). Then you have to trust it to get you to your goal, even if things seem to be lining up against you along the way.

My husband and I celebrate our races (his, 1:55, mine 0:00) at the SeaWheeze post-race Party at Stanley Park.

If you enjoy driving your car on track days at HPDEs, you have the power to make every weekend at the racetrack enjoyable. So what if your car is down on power, you’re feeling sick, or your data malfunctions? Remember why you’re out there in the first place. You get behind the wheel for how it makes you feel. A while back I asked professional driver Leh Keen what his favorite car was. “It’s the (Porsche) 993 Cup I learned to drive in,” he quickly answered, explaining that the car offers him a very pure connection to the road and fires up what he loves about driving. This car is not the fastest Leh has ever driven and it doesn’t have data acquisition in it; when he drives it, it’s all about oneness with the car.You hold the power to enjoy every track session in your attitude. Everything else is a variable.

A few years ago my girls, who were still quite little, asked me if I ever won any of the races I competed in. “I don’t win a trophy, but every time I get out there and run I win for myself,” I told them. Last weekend, my body and I celebrated a huge victory at the 2014 SeaWheeze: no excuses, no complaints. Just you and I and hard, steady work. Loving thoughts. Thousands of steps. And we got there, even after pregnancy, cancer and eye surgery. Not bad, body—not bad at all.

Fun with Tires: the 365 Days of PSAS3 Project