PorscheMama » Uncategorized » Is Ego Getting in the Way of Your Photos (and Selfies)? Me Too.

Tips for Enjoying Yourself (And Supporting Your Racer) At the Race Track
View From the Back Seat: Is the Audi A3 Sedan a Family Car?

Last Summer, I found out yoga photographer Robert Sturman would be offering 30-minute photoshoots in Chicago on Oct 16th. The opportunity was just too perfect: I love yoga, and I love Chicago. I would be turning 42 that month (and after cancer, every birthday, wrinkles and all, warrants a big celebration).

Over the last two years or so, I’ve probably “liked” every photo Robert Sturman has posted on Facebook and Instagram. I believe Robert captures asanas — the postures in yoga — unlike anyone else out there. While there are plenty of  great yoga photographers, I really like how Robert photographs yogis outside, in the world, in the city, in nature. The resulting images often capture an unusual droplet of calm amidst the unpredictable environment — much like the yogi’s practice within a busy life.

This was an irresistible opportunity, clearly. I signed up on the spot and announced it on social media — the modern equivalent of posting the banns.

But there was one problem: I am very camera shy. When I see a lens of any sort, I freeze. I don’t like to pose for photos, even for my Mom (but she takes thousands anyway). The majority of my youth was spent hiding from the camera, and practically every yearbook from grade 1-12 featured the school mascot holding a spot where my mugshot should have been. Much like some kids never develop athletic abilities while young, you could say I never developed good picture-posing habits. I have yet to take a “sexy” selfie successfully (silly face selfies? Check). My husband often asks, “why do you make crazy faces when I try to take pictures?” and I usually mutter something like, “dunno.”

But I do know. I am not comfortable with photos of myself because I grew up extremely uncomfortable with the way I look, and a photo was always the perfect opportunity to immortalize what I perceived to be my many imperfections. Even though at this point in my life I have outgrown most of the harsh self-judgement I reserved for my face and body as a young woman and understand perfection does not exist, some primitive part of me still wants a picture to be perfect. Old habits die hard, I suppose. Who knew a selfie could be so complicated?

With all this residual photo-anxiety, it should come as no surprise that three days before the scheduled yoga shoot I had initially been so thrilled about, I started getting antsy, swinging between telling myself “don’t worry, it’s just a moment in time in a lifelong practice. It is where you are at 42, it will be awesome!” and “what were you thinking!? You’ve seen the kind of yogis he photographs, and you don’t look like that!” En route to Chicago, I felt like eating every baked good and doughnut in sight (but thankfully I am a doughnut snob, so it did not happen).

Paying homage to the lions of the Chicago Art Institute

The day of the shoot came and my husband accompanied me to meet Robert and his assistant/manager in front of the Art Institute. As soon as he arrived, Robert put me at ease with his down-to-earth nature. “Let’s start here,” he suggested, as we faced the Art Institute lions on Michigan Avenue. He asked which yoga poses I would like to do, and I told him I had prepared four. He said, “go for it!” and just like that, the camera started clicking away.

Having never participated in a photo shoot before, I was unsure as to whether Robert would suggest which yoga pose I should do, or whether I would be able to flow between poses. Turns out, he would have been ok with either, and flowing would have probably helped me relax. Striking a random yoga pose is much, much harder than flowing through asana creating energy (which photos capture). Supermodels move through various pouty poses, so yogis probably should, too (minus the duck face, hopefully). 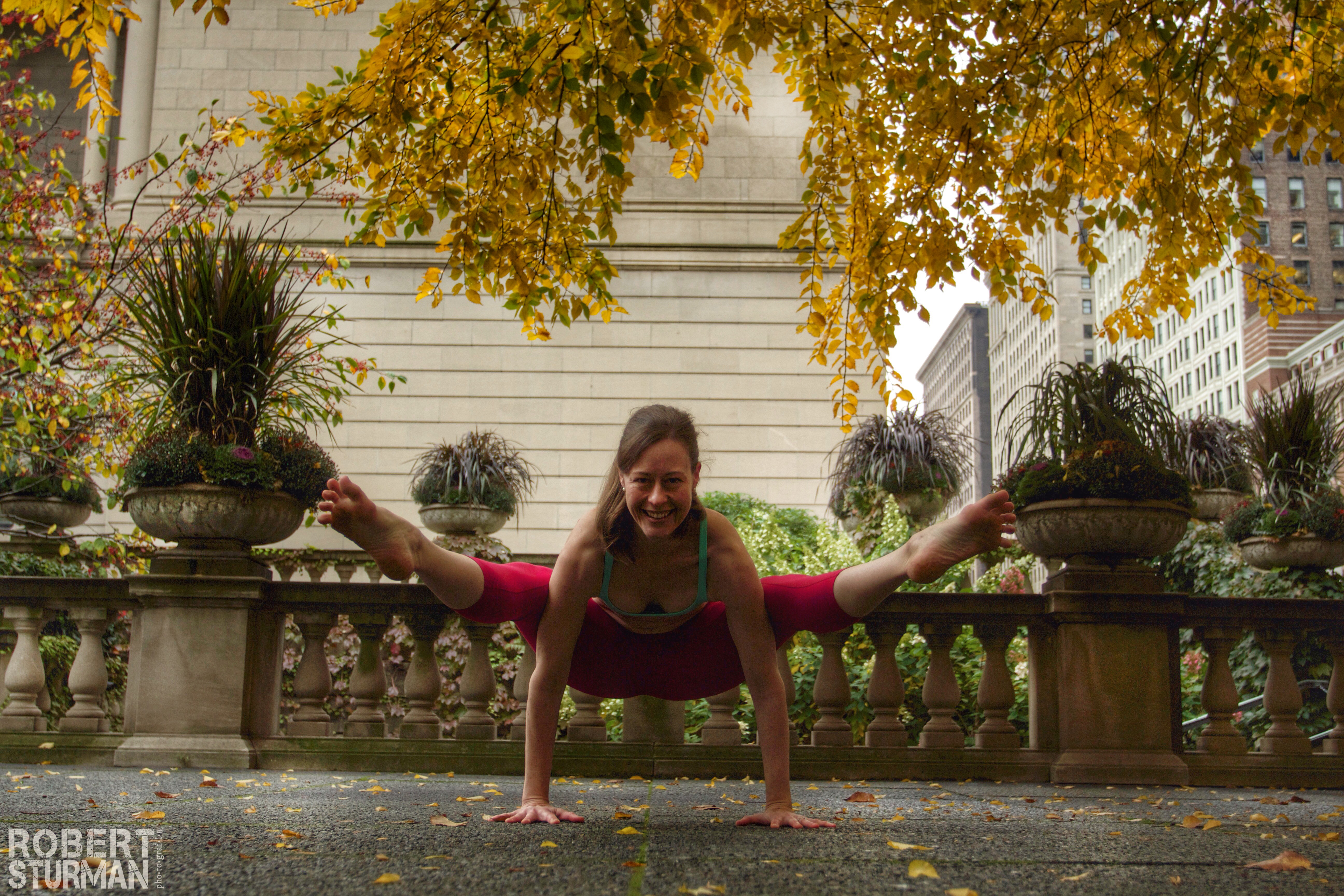 We moved toward Millennium Park, and on the way, Robert suggested I try firefly in a little courtyard next to the Art Institute. A security guard walked up as I was in mid-firefly and said, “no shots for publicity unless you have museum permission!” Robert put him at ease while continuing to shoot the arm balance. The interaction made me smile, and the smile made it into the picture. 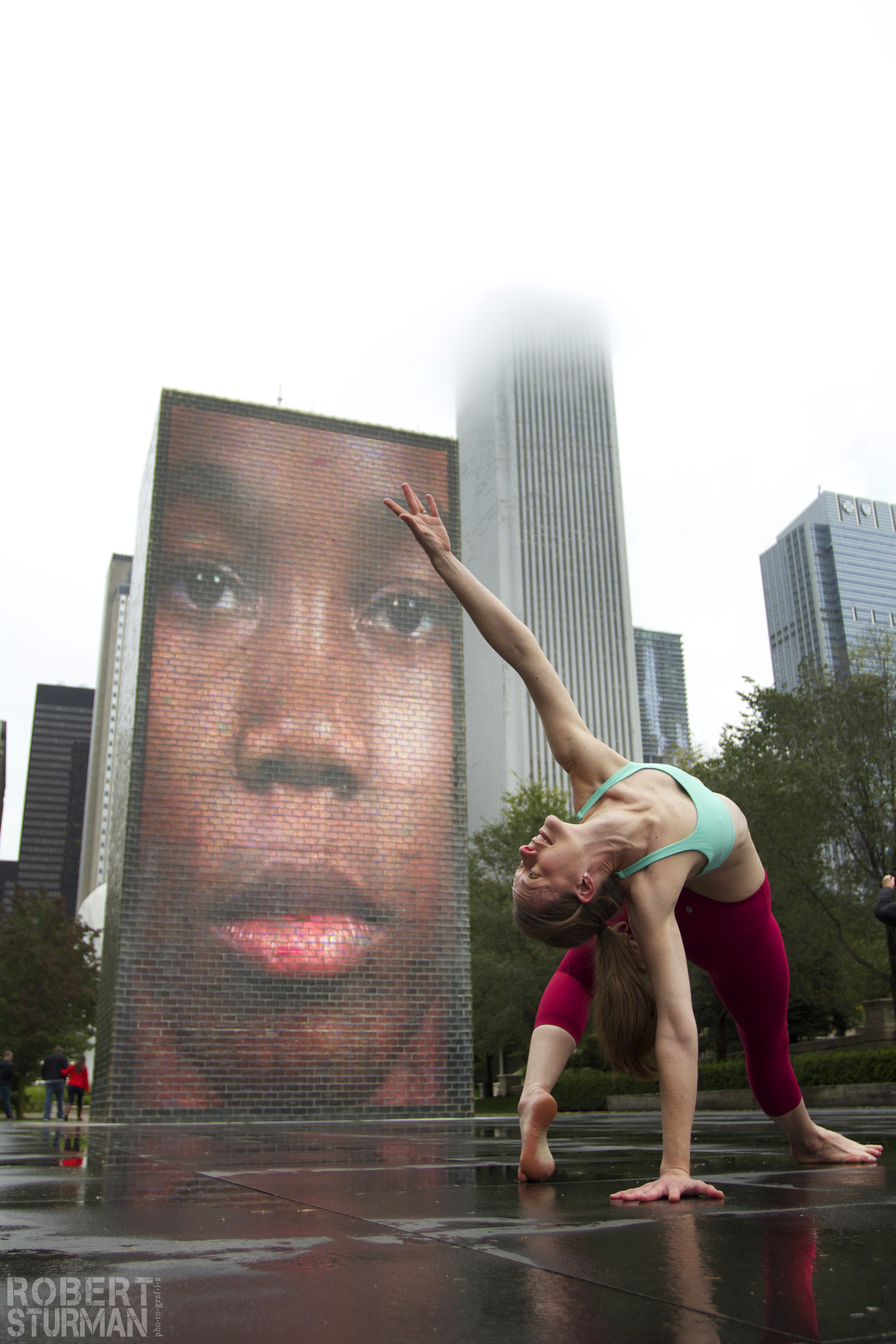 At Millenium Park, in front of the large screens which reflect the faces of various Chicago residents, Robert said, “OK, reverse your warrior!” He suggested I pose on  the leftover water from the morning’s rainshower for reflection. More directions followed: “don’t wrinkle the forehead, and lower the arm!” I didn’t quickly respond to either. Turns out when you look up (something most students of yoga do in certain inversions) it wrinkles the forehead. Since I normally don’t see myself practice , I wasn’t even aware that this was the case. The wrinkles stayed in the photo (but, as I said before, wrinkles are a fact of life at 42, so that was ok with me). I also found out that “up” can mean different things when you are already upside down, so as Robert encouraged me to move my arm “up”, I kept reaching deeper into the fold vs. up toward the sky. “It looks like you are picking his nose,” said Robert, and that made sense…I needed to move the arm away from the boy on the screen behind me. Photo #3 done (and I am never making fun of models again).

It was finally time to take the photo I had hoped for in front of Anish Kapoor’s Cloudgate. Known as The Bean, Kapoor’s sculpture is made of seamless polished stainless steel, providing an ever-reflecting surface of the changing city around it. It has been my favorite installation art piece since it opened in 2006 because it lets the viewer see himself or herself within the city.I held a few dancers and another reverse warrior as we moved around the sculpture, making our way among the crowds. 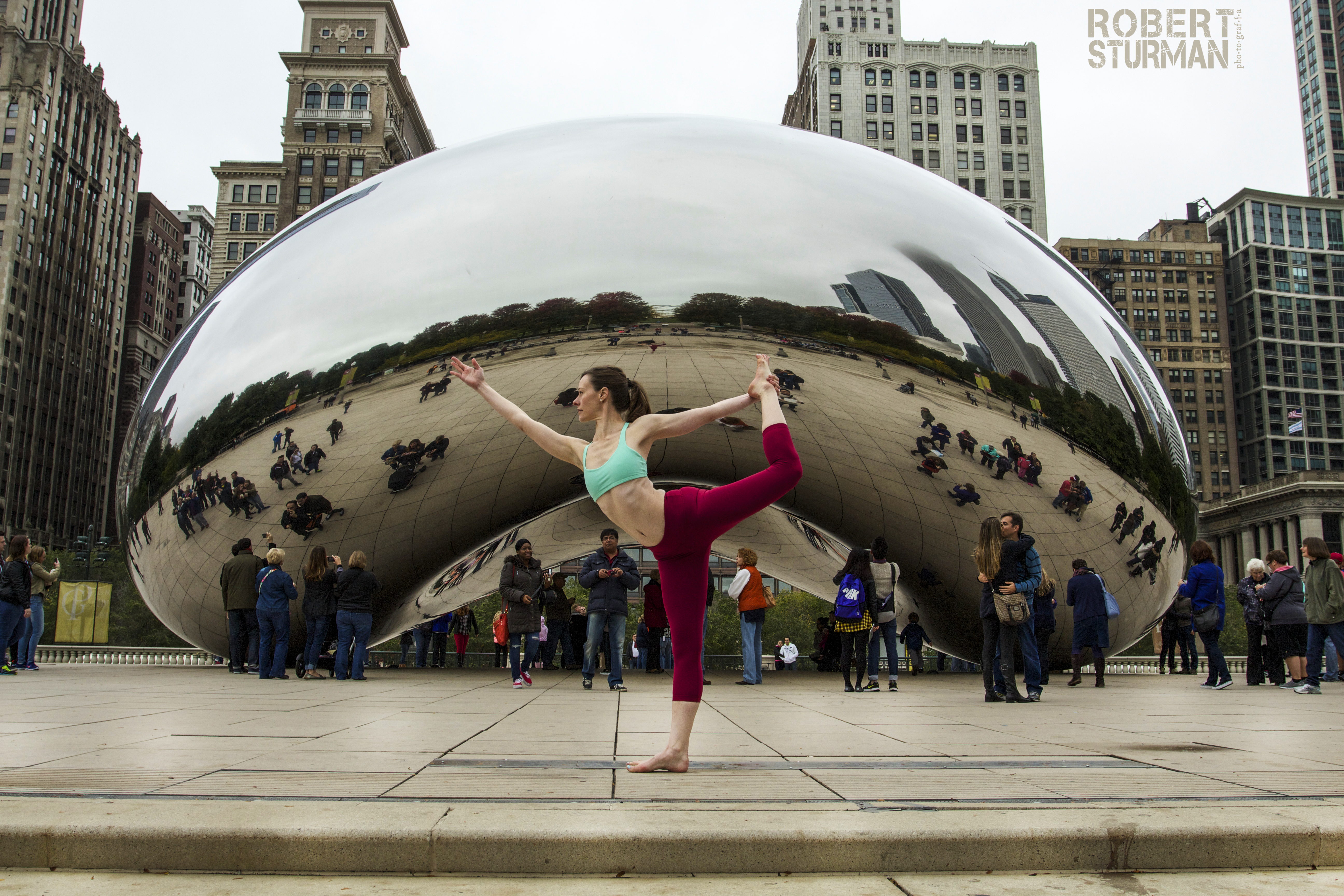 Amazingly, I wasn’t once bothered by the people around us. I didn’t even notice anyone, to be honest, but I am glad they were there, because in the final Bean shot I chose, a couple can be seen kissing off to the side. Chicago, Yoga, Love…totally up my alley.

Before our session came to an end, Robert turned to my husband and said, “I always like to offer a photo on the house to the gentleman who accompanies his lady on her shoot.” C hesitated, but I encouraged him to pose. He was dressed in street wear and had not warmed up, so I suggested crow. He went ahead and I got to be the audience for a change. It was a good picture indeed, and it turned out to be my favorite from the shoot. I hopped in for a quick crow with him for the last picture. 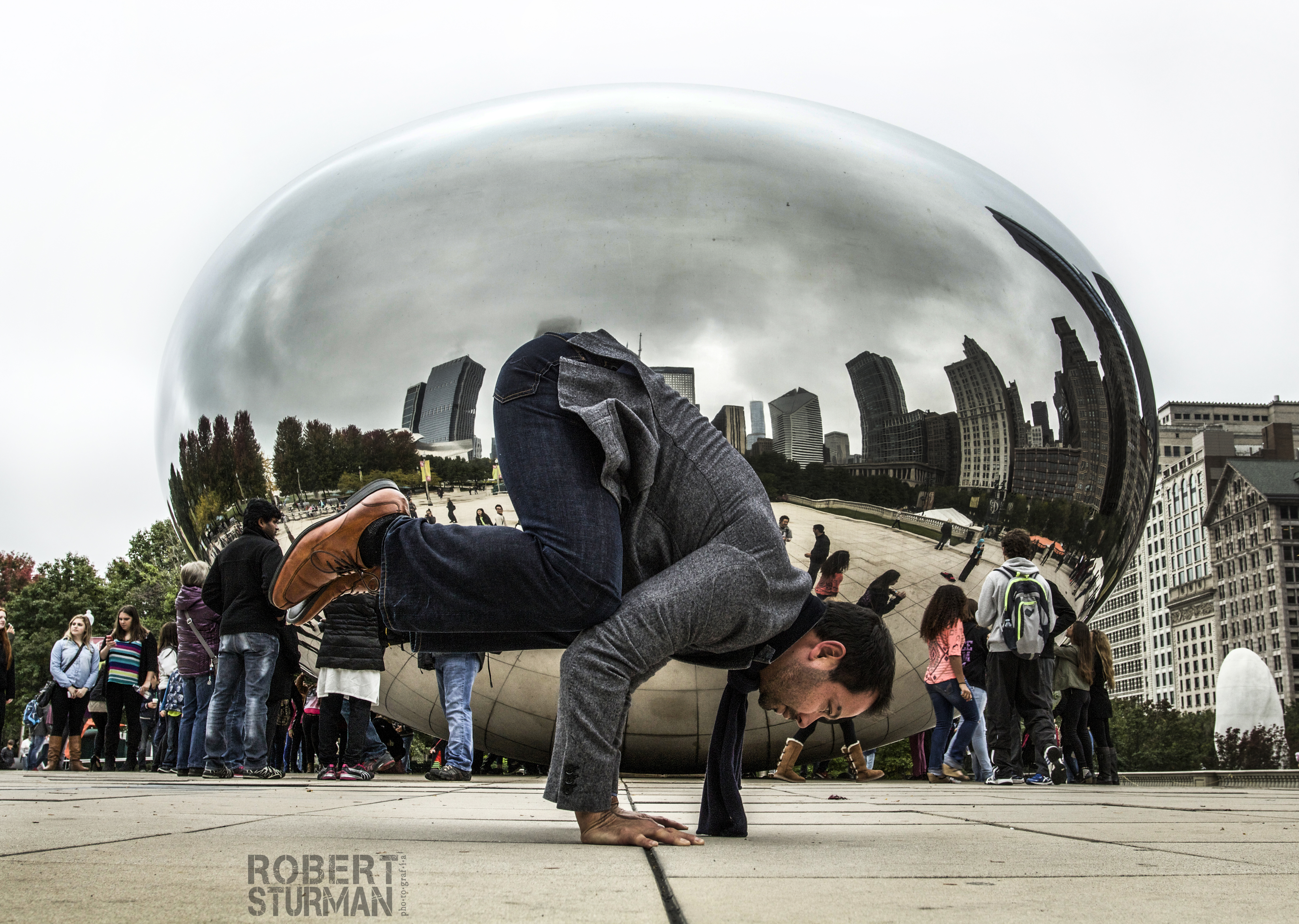 My favorite photo was completely unplanned, unrehearsed and magical

After it was all said and done, I realized that worrying about the photoshoot and whether the photos would turn out perfect had been a waste of time. The time we spent taking pictures with Robert Sturman was nothing more than a half hour of what has thankfully been, so far, a good life. I am glad I shed the remnants of my photo self-consciousness long enough to let him capture the images which are already serving as a reminder of a wonderful moment with my beloved husband in a wonderful city. None is perfect, but each is definitely beautiful.

My yoga photoshoot reminded me that in the search for photographic perfection, we often miss out on wonderful moments.  It’s so easy to find flaws in yoga pictures, for example: legs that are not straight or too low, arms that are not high enough, strange gestures. Instead of seeing flaws, mistakes, or wrinkles, see if you can enjoy just how perfect that imperfect moment in time really was. So often we spend our lives waiting for everything to be just right and we miss the now, only to regret it later. And when we look back, the best photos are the ones that are blurry, crooked or not quite as planned – just like life. I am sharing my images here to encourage you to let go of what your ego believes you should look like in your own photos. Take the pictures, pose for them, enjoy the experience. Because no matter what the results, a photograph only captures a moment in your wonderfully imperfect life. 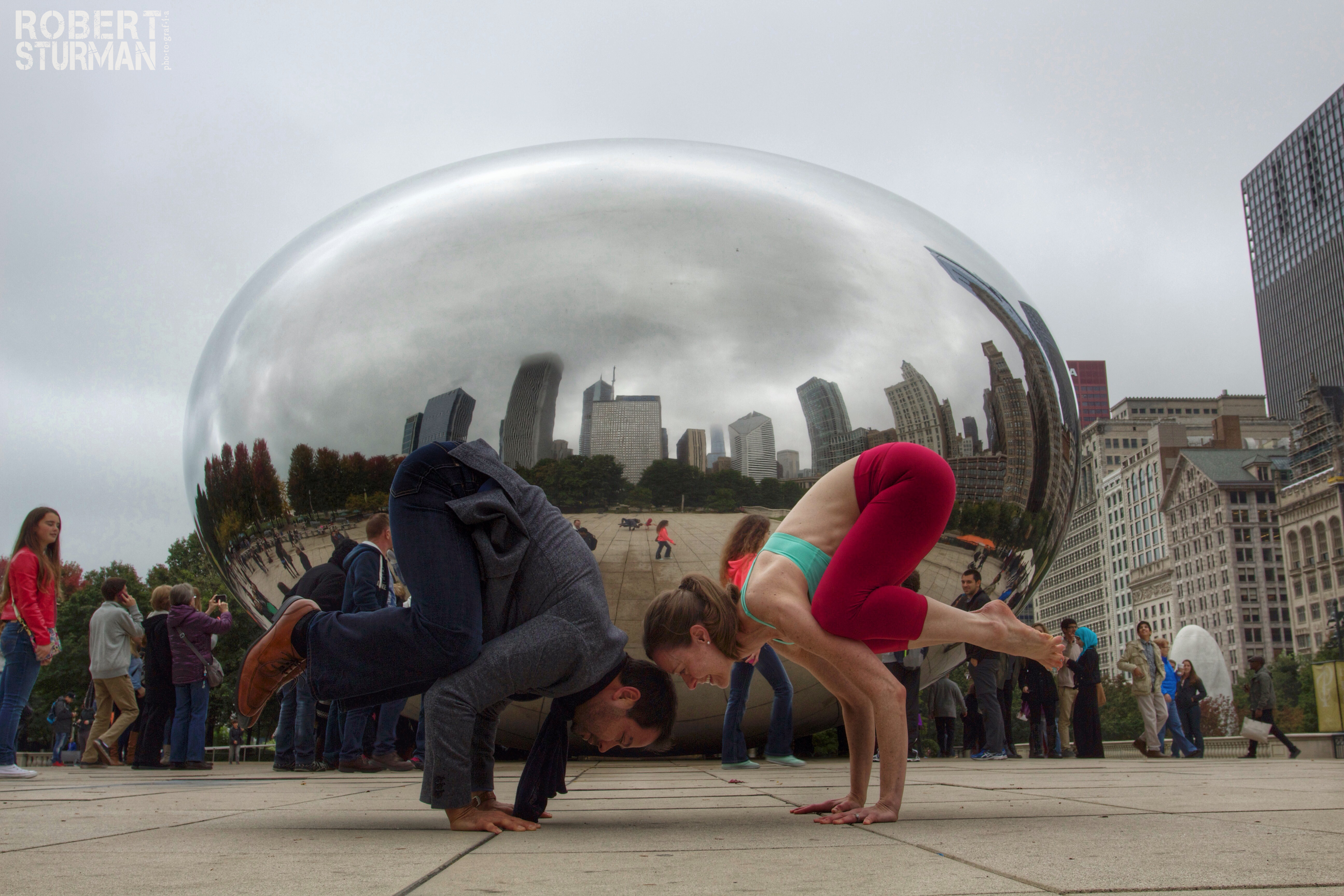 The end to a lovely adventure in Chicago

Here are five things I learned from my yoga photoshoot:

Tip 1: Have your poses ready, and don’t be shy to flow/move through a few in one spot

Tip 2: Holding a pose is much harder than moving through it. Same with a smile. Smile lots and smile often — and not the self-conscious kind, but the big, happy kind that shows your joy

Tip 3: If you don’t know whether something looks good, don’t be afraid to ask the person behind the lens. This does not make you “high maintenance”

Tip 4: Relax. The less you overthink the pose, the more fun it becomes. This also applies for your family photos or your passport photo. Don’t over-think it. (Easier said than done).

Tip 5: When taking photos in public, don’t worry about people milling about or watching as you work with the photographer. Most people enjoy seeing photographs being made.

Do you have any photo tips of your own? Share them here!

Family Yoga and the Quest for the Perfect Photograph