PorscheMama » Uncategorized » Family Yoga and the Quest for the Perfect Photograph

On Life and Winning: Wisdom from a Spec Miata Race Weekend
The Well-Traveled Practice: Yoga Wherever Your Adventures Take You

Family Yoga and the Quest for the Perfect Photograph

This morning I was wonderfully surprised to find a photo of our family in Yoga Journal’s online pictorial, Stoke Your Spirit: 25 Images to Inspire Connection. The piece features portraits of yogis taken by my favorite yoga photographer, Robert Sturman. Among the 25 photographs is a group shot of my daughters, my husband and I in natarajasana (lord of the dance pose) with the city of Chicago behind us.

I love this photo. In fact, I love all the photos of my family Robert captured on that warm September morning in the city. Each shot captures one of many magical moments of our adventure together. But the featured photo makes me laugh, too, because I think of the before-and-afters that framed the magical moment when Robert’s shutter went off. If the photo is pure family yoga bliss, the bookends were most definitely not. 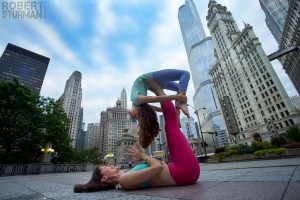 If you practice yoga, you’ve probably heard that yoga is just like life: some good days, some bad days, and in between lots of lessons in patience and self-acceptance regarding what you bring to the mat, be it physical or emotional. I’d like to expand that comparison to include practicing yoga as a family. In some of the photos you see on social media, families practicing together may appear calm, collected and perfect. In reality, yoga with your children is just like life with children: adventurous, non-linear, emotional, requiring of much patience and – most importantly – filled with lessons in letting go of ego. If there are poses that are ranked “advanced,” then practicing with your family, too, should be ranked right up there with vipassana meditation in terms of its difficulty.

When I ask my girls to practice yoga with me, V usually says, “I hate yoga!” V is very athletic and muscular and her tight hamstrings mean most yoga poses – even the basic ones – don’t feel good or easy to her. She is also fiercely competitive and used to succeeding in almost everything she tries, so yoga humbles her. In contrast, her sister J is happy to throw on leggings and give yoga a go whenever I ask. She is flexible and can easily get into most poses, and her playful spirit means that even if she falls out of a pose like headstand 100 times, she will keep trying until she can do it. Yoga is also one of the very few activities where V’s firstborn dominance over J is inverted, which is enjoyable for J, but not so much for V, who likes being in charge.

Soon after we started giving yoga a try at home, I realized my girls’ willingness to participate in family yoga sessions had very little to do with me or how interesting yoga was, and everything to do with the physical (the flexibility they were born with) and character (dominance, patience, persistence) attributes they brought to our little yogic experiment. And I realized as adults we do exactly the same thing, but are better at decorating it with complex reasons.

In life, we run away from what is not natural to us, areas where we don’t think we can shine, or activities where we are humbled. We run toward where we lead, where we dominate. If we have a yoga practice, we avoid the pose we can’t master or the one that doesn’t look so good in the yoga selfie. We “hate” the pose that our bodies don’t easily do and we go full speed toward what is easy, natural or even habitual. And then we get frustrated when our children do exactly the same thing in their little universe, or when we try to teach them yoga. 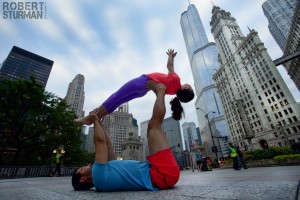 There is nothing wrong with gravitating toward what you like and where you shine, of course – we all should have places where we shine and live joyfully. But ask yourself when you say you “hate” something (or someone) – is it because it is humbling you, or because you really don’t like it? Is it because the person (or your child) reminds you of something about yourself you wish you could change but feel you can’t? Oftentimes what we hate are limitations within ourselves, whether physical or in character. It is easier to say we “hate” something than to face it and be brave enough to attempt introspective thinking.

The yoga I practice with my kids is nothing like what I imagined it would be. When the girls do join me, the practice is not linear and quiet, and the poses are not held for a calculated amount of time. Some poses are quickly dismissed and others are practiced over and over until they are mastered. When I convince them to give yoga a try, they argue, they give eachother unsolicited tips, and one often walks away frustrated (but sometimes returns). It’s noisy and intense and physical. We don’t talk about what OM means, or about how the movements and breaths are meant to point us toward learning the bigger lessons in life. We do laugh and take pictures. Sometimes a snack is needed in between poses. There is most often no savasana. But it still works, because by practicing with my family, I have to let go of any preconceptions I have about what a practice should be like. This kind of practice is the most fluid, unpredictable yoga there is.

The day before our shoot with Robert, the four of us piled into the car and drove to Chicago. Between the day when we had chosen our outfits for the shoot and the trip itself, the girls had changed their mind. “I don’t want to just wear a sportsbra!” one of the girls cried, “I don’t want to be in the photo!” I had hoped that we could all wear leggings and tops to match, but that was clearly not going to happen. We negotiated and threw in a trip to Dylan’s Candy Bar to sweeten the deal and the girls agreed to pose in the photos wearing shirts, which was just fine with me. There were a few more cries of “I am not good at yoga, it’s gonna be terrible!” but thankfully by the time the morning came and we met Robert, we were (mostly) ready to go. I won’t say that the girls were as excited about posing as I was, mostly because posing requires that you follow directions and hold poses, and they are more interested in running around and chasing pigeons (as they should be at their age). There was also some hesitation on their part when they had to remove shoes for a photo (ewww! Is that a cigarette!? Mooom!) and the ever-present hunger complaints, but in the end it all worked out. The session lasted just long enough because no sooner had Robert snapped the last shot, V whispered, “I am soooooo hungry I can barely walk, Mom! I am too weak for yoga!” And off we went to breakfast.

Before I became a mother, I had visions of what parenting would be like: hard work, interesting conversations, lots of learning opportunities. Within all this I imagined control of sorts – order, organization. But in reality parenting is complete chaos. Raising the girls has thus far been the hardest and most humbling experience I’ve had, and no amount of preparation, organization or control could have prepared me for what I would learn in the process. My girls are forces of nature – comets on their own path that fly by me every so often. What I love most about our yoga portraits is that they capture some of the moments when we occupy the same space for a breath or two. Even though they are brief, those moments with our children really are like these photographs – absolutely beautiful.

Tips for including your kids in yoga photos, professional or ortherwise

Harry Potter Yoga: A Flow for Little Witches, Wizards and Even Muggles