PorscheMama » Uncategorized » 52 years, 4 generations, and two hemispheres: the journey of Panchita the Beetle

Goodbye, Lucy.
A Year of Immunotherapy, A Lifetime at the Cancer Center 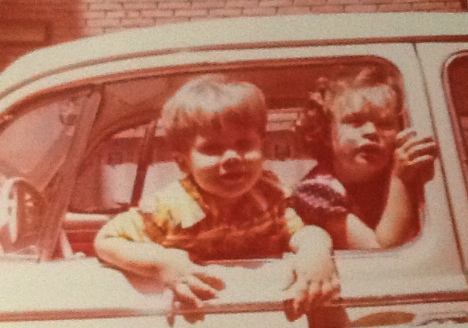 52 years, 4 generations, and two hemispheres: the journey of Panchita the Beetle

Last June, I received a family heirloom. Thanks to ubiquitous smartphones, we were able to watch its three-week journey, starting with the day when it was loaded onto a truck in front of my parents’ apartment in Lima, Perú. A couple of days later, a customs agent sent us photos of it, parked amidst boxes inside a shipping container loaded onto the ship Capricornus, which transported it on the waters of the Pacific and through the Panama Canal all the way to the U.S. We received another photo of it waiting at customs in Miami, surrounded by yet more parcels. Then, the driver charged with transporting it to Michigan sent us a video as he loaded it onto his trailer for the highway journey. A few days later, after traveling over 3,000 miles, my grandfather’s 1966 Volkswagen Beetle arrived at my doorstep in Michigan. 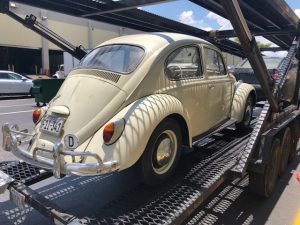 It was surreal to see his little car in the land of F250s, Denalis and Navigators, still wearing Peruvian license plates and looking like it had survived an accidental trip in a South American Tardis. It quickly became apparent that the car was a she, and we wanted to name her. While waiting for her to arrive, we hadn’t known the car was a she – at that point it was just the Beetle, el escarabajo, or el Volkswagen, as she’d always been called). After a bit of back-and-forth, my brother and I named her Panchita. My father had lobbied for a more Germanic name, but we argued that while she may have been built in Germany, she had lived her entrire life on the roads of Peru, so she was really a criolla, just like us. 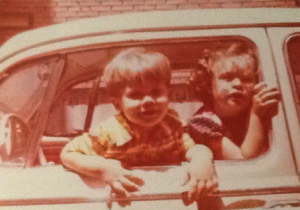 My brother and I (probably about to get into a fight).

My grandfather purchased Panchita from his employer, Bayer Perú, in the late sixties. The Beetle that was once a company car was meant to be the car everyone in the family could use or borrow. After he bought it, everyone did indeed drive it: my Aunt used it to commute until she got tired of the lack of air conditioning and my father borrowed it whenever he needed an extra car. Every summer, my mother drove my brother and I around in Panchita, easily reaching the back seat to break up fights while downshifting to 2nd so the Beetle could make it up the arid Peruvian hills. Panchita spent summers full of sand and kids; sometimes all 4 cousins would get stuffed in it, though this became much harder to do as we added a 5th cousin and all of us grew to be over six feet tall. Even my grandfather drove it occasionally, particularly when he didn’t want to drive his beloved Mercedes on questionable roads or with his German shepherd as passenger (this was probably wise of him because at least once, the poor dog had enough of the winding, dusty roads of the Peruvian desert and vomited on my brother and I, breaking up a fight much faster than my mom’s threats). After my parents’ and my generation outgrew Panchita’s lack of size and comfort, she was given to my cousin M, who needed a starter car. He drove her to college, and eventually on his first date with his now wife. Predictably, Panchita’s 6-volt battery died while they were having dinner and his date had to help him push-start it. “That is how he seduced me,” she recently told me, laughing. They kept her for a while, but when they had kids they, too, outgrew Panchita. 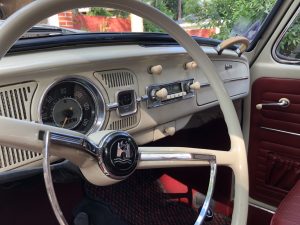 So few buttons, so much zen.

After my grandfather passed away nearly fifteen years ago, Panchita became my father’s. He was wise enough to understand that this little car held a great deal of our history in it, so he spent some time lovingly restoring her – not the way you would restore a car for a concours showing, but the way you maintain a useful vessel filled with memories. He replaced the battery to minimize push-starts, had the interior redone, and re-chromed the bumpers and various parts. When Panchita became mine a month ago, I probably hadn’t sat inside in nearly two decades, but the moment I did all the stories she held rushed right back. The smell of the red vinyl interior and the sound of the engine instantly transported me to those hot summers in Peru, the sweaty fights with my brother in the back seat, and the trips to my grandfather’s farm with the dog panting on us. There was something surreal about being in the driver’s seat, smelling the scents of upholstery and combustion and hearing the music of that tiny engine. There is such a meditative quality to this car: there is no working radio, no tach, no clock, no A/C, and no driver assists of any sort. When you’re in it, you’re going nowhere fast; you’re driving and that’s it. Panchita is the kind of vehicle that reminds you that there was driving before TV, Netflix, and electronics, and it was pretty awesome. 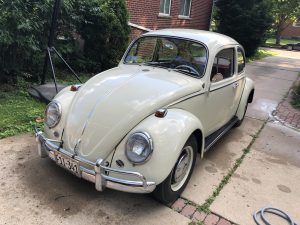 Panchita gets a bath after her travels.

While some cars induce admiration because they are so exclusive and out of reach, the Beetle brings joy because at one point, it was the most common car around the world. I’ve only driven Panchita a month, but wherever I happen to be, people stop me to tell me about the Beetle they had in their life, and to tell me about the adventures they had in it. My friend N tells me, “when I was a kid my parents would do a cross-country trip every summer. We would leave while I was still asleep, so they would put me in the small cubby in the back of our Beetle, and when I’d wake, we’d stop for breakfast.” Our friend and long-time mechanic T tells me that he inherited a Beetle after his brother was drafted, and the first time he went to put gas in it, he was stunned to discover $2 would fill it up. The Brazilian man who transported Panchita to Michigan tells me, “this was my first car!” At the grocery store, a man walks up to tell me that he, too, had a 1960s Beetle. On the road, while waiting for the traffic light, a man asks me about Panchita, and when I tell him the car was my grandfather’s, he says “you know he’s riding with you, right?” Later, at another traffic light, a man enthusiastically gives me the thumbs-up and shares, “I had one in Syria!” It is wonderful to own a car so special yet so common, something that is so deeply tied to my unique and fragmented family history but also so intertwined with the world.

As I drive Panchita, I wonder: in this era where everything (including cars) is so anticipatory, immediate and disposable, will the new generations have the kinds of visceral, experiential memories attached to cars some of us were lucky enough to get? Cars used to be so deeply tied to freedom, weren’t they? Our first cars were, in a way, like our first loves: we remember their smell, their looks, but most of all the experiences and discoveries associated with them. Among the people I am lucky enough to call friends, heads nod when we recall youthful adventures in our parents’ cars or our own first car. Will that be the case among a generation that doesn’t have to travel to socialize, and that is learning to drive in cars that are so predictably safe that they are beyond dull? I am certain young people will have plenty of their own adventures to recall in middle age, but a big part of me would like cars like Panchita to be treasured beyond my generation. 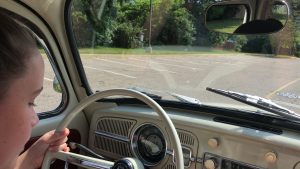 As if to give me hope, one of my teen daughters is showing interest in Panchita. Soon after the Beetle’s arrival, I take her for a ride and she tells me she loves the smell of the car and the “feel” of it. “It’s like a bubble of happiness!” she exclaims, adding, “I could ride in this car all day!” A day later she tries driving Panchita for the first time, stalls once, and then takes off, intuitively feeling the clutch-throttle relationship. I can’t contain my joy and break the no-electronics magic of our ride to take a video. She tells me she can’t wait to drive it on the road, but she’ll have to – the consequences for taking a car for a spin without a license have changed since I was a kid, too. “One day, this will be your car,” I tell her, and she smiles, adding to the memories Panchita already holds.

50 Shades of Ingolstadt: The Wheels of Christian Grey

The Ties That Bind: Cars and Siblings