PorscheMama » Uncategorized » 50 Shades of Ingolstadt: The Wheels of Christian Grey

Mothering, Expectations and Shame
Peace in Imperfection: A Trip to Peru

50 Shades of Ingolstadt: The Wheels of Christian Grey

(Spoiler alert: If you have not read Fifty Shades of Grey or watched the movie, this review will give away crucial details about the cars featured therein. Proceed at your own risk.)

Whenever I drop my A4 Avant off for service at the dealership, I get an Audi loaner. I love loaners. Unlike a test drive, a loaner lets you really get to know the vehicle as you go about your day. As I drove my loaner Q5 to work this morning and noticed how different it felt from my Avant, I wondered what it would be like to have a fleet of Audis at my disposal so I could drive a different one every day. I indulged in my fantasy: I’d drive my Q5 to Home Depot, then swap back to an A3 for more nimble commuting around downtown. On lovely Summer nights, I’d take my R8 out for a drive. 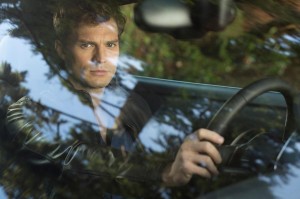 “My tastes [in cars] are very singular.” (still from Fifty Shades of Grey)

Then I remembered someone has already made my fantasies come true: E.L. James and Sam Taylor-Johnson, writer and director of Fifty Shades of Grey. When I first read the controversial novels so many love to hate (more controversial for what some view as E.L. James’ poor writing skills than for the BDSM portrayed on its pages), I enjoyed encountering Christian Grey’s various vehicles on its pages.  Mr. Grey gained my respect after it became apparent he favored one of my favorite carmakers, Audi. Forget about the Red Room of Pain — let’s see your garage, Mr. Grey.  Naturally, when the movie adaptation of the book made its debut, I wanted to ensure Audi was properly represented, and I was willing to put up with having to see Jamie Dornan’s bare chest for the sake of automotive integrity.

I am happy to report that, while many of you may have been disappointed by the casting of actors (Dakota Johnson and Jamie Dornan) in Fifty Shades of Grey or the way the script was handled, you won’t be disappointed by the automotive actors.  Audi is clearly the dominant marque in the film. First to make an appearance is Christian’s S8, a worthy vehicle for chauffeur/manhelper Taylor to drive his young, debonair billionaire boss in. I wondered if the A8 L – a slightly longer version of the already roomy A8, might have been a better choice, as it could afford Christian more legroom to, er, finalize deals in. If I had a chauffeur and had to be driven (not my kind of fantasy, but hey), I would be satisfied with this setup.

For further chauffeuring of protagonists Ana and Christian, Taylor relies on the largest SUV in Audi’s fleet, the Q7. Once called “a watermelon” in a car review, the Q7 is large and heavy, but still manages to look good on film. How many SUVs can do that, especially when the camera adds 10 lbs to its already curvilicious 5350 pounds? Not many. 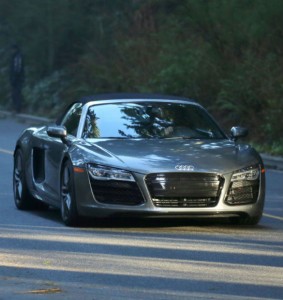 The R8 spotted in Vancouver during filming of Fifty Shades of Grey.

After some in-between-car action,  it’s time for Christian to drive Ana home, so she follows him to the basement garage at Escala, his very up-scala building. “Which one is yours?” she asks innocently as they walk past a row of Audis. “All of them,” he replies. Did it just get really hot in this movie theater? Then he walks straight to the R8. Oh yeah, yes it did.
No wonder this movie is rated “R”, ha ha.

As someone who enjoys the lovely notes an exhaust can make, I appreciate that Fifty Shades includes a scene where the R8 pulls off into a bucolic road so we can hear the roar of its engine before Christian has to wake Anastasia so they can have a heart-to-heart. The car sounds gooood in this scene. It also looks good surrounded by nature. The only perplexing detail in all this is the fact that Ana has fallen asleep during the ride. Fallen asleep. In an R8. What happened here? Was this director Taylor-Johnson’s subtle message about Ana’s lack of interest in cars, or a statement about Christian’s passionless driving? The last time I got a ride in an R8, sleeping was the last thing on my mind (probably because the driver was confidently driving around 100 mph in rural Virginia roads…but that is another story). The lovely R8 is not on film nearly enough — but that’s fine, because there’s more.

Soon after he delivers a speech at her graduation, Christian gives Ana a new 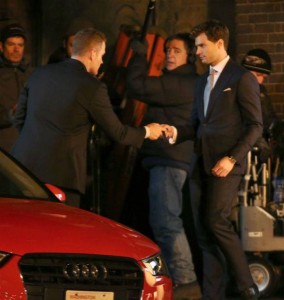 Taylor hands Christian the keys to Ana’s new A3. (From the set of Fifty Shades of Grey)

A3 sedan as a graduation present – but no A3 sedans were sold in the U.S. before 2014. I must have gasped in the darkness of the movie theater because my husband whispered, “I know, I know, it should be the five door…” And yeah, it should have been. (For those of you who are sticklers, the “texts” back me up on this detail: in the book, Anastasia describes the A3 she receives as a “hatchback two-door compact.” I Googled this and was shocked to find there are some very serious Fifty Shades fans out there who notate everything about these books. Everything.) The A3 five door is my not-so-secret Audi crush, so to be robbed of seeing it onscreen was difficult for me. Also, its appearance was brief, and left me longing for more. Thankfully, the film was just warming up.

Before moving on to the next Audi, let’s take a familial detour here and mention a hidden jewel in the movie: Ana’s classic Beetle, “Wanda.” I have no idea if E.L. James is a car person, but if she isn’t, she may have just accidentally picked the perfect “old” car for Ana to own. The iconic Beetle is, in a way, the granddaddy of all those hot Audis. It is the idea which arguably inspired all the functional yet awesome German cars: the people’s car. While I loved the fact that Christian gifted Ana a new A3, I was none too pleased with the fact that he had his valet, Taylor, sell Wanda without asking. Surely she could have kept both…because every girl needs a classic car to compliment her modern wheels. If Christian had sold my classic Beetle, I would have kicked him to the curb. At least until he promised to let me drive the R8. 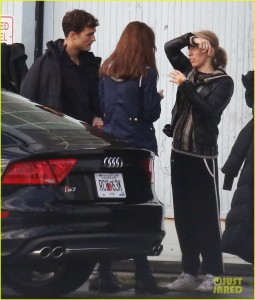 One of these actors has never been called a diva. The S7 on the set of Fifty Shades of Grey. (Photo courtesy of Just Jared)

The next Fifty Shades Audi makes its appearance in Georgia, where Ana is visiting her Mom post-graduation. Christian’s stalking is made more forgivable by the fact that he picks her up in a gorgeous S7 (with Georgia plates – gotta admire the man’s inter-state devotion to the brand). There is a romantic glider flight somewhere in that scene too, but as soon as a tiny detail of the car made it within the frame, my husband and I called out the model:“A7!” I said, while he said, “S7! Look at the trim!” He was right, of course. I love the shape of the A5 and A7 because they are like automotive mullets: business in the front and party in the back. The “S” just adds a little more naughty to something that’s already awesome. And, in a way, Christian Grey is like that too – so this is a worthy car for a control freak stalker with peculiar taste in letting go and very good taste in cars.

In summary, I give Fifty Shades of Grey‘s four-wheeled protagonists four out of four stars. You may have heard that there are two more installments of the Fifty Shades movies already in the works  because the first one – like it or not – did quite well in the theaters. And while this kind of movie may or may not be your cup of tea, we can at least count on one good thing to come of all of this: more onscreen Audi love.

In the meantime, it’s time for me to return my loaner Q5 and run back into the arms of my trusty Avant, which never fails to satisfy. Laters, baby.

52 years, 4 generations, and two hemispheres: the journey of Panchita the Beetle

View From the Back Seat: The Kid’s Guide to Surviving Road Trips with Your Car-Loving Parents